TD calls for referendum on abortion 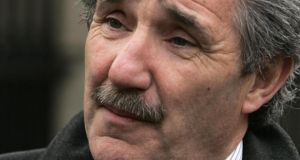 John Halligan: “A woman also has a right not to be raped.’’


Independent Waterford TD John Halligan said he defied any member of the Dáil to look in the eye of a pregnant rape victim, or a woman carrying a baby certain to die, and say the Oireachtas had a greater entitlement to control her body.

“We cannot continue to brush these cases under the carpet and pretend they are not happening,’’ he added.

Mr Halligan commended the Taoiseach for bringing forward the Protection of Life During Pregnancy Bill, adding that four taoisigh before him had failed to do so.

He added that startling figures released last week showed sexual offences had risen 50 per cent between 2007 and 2011, but only one in six cases resulted in charges being brought.

Recently, a man convicted of sexually assaulting a woman avoided a custodial sentence by paying her a sum of money.

The draft Bill carried the potential of 14 years imprisonment for a woman, pregnant as a result of rape, who might attempt to have an abortion in Ireland.

“Does the Taoiseach not think this is warped justice ?” Mr Halligan asked.

He said 17 pregnant rape victims had abortions last year. “The pro-life argument centres on right to life of the foetus,’’ he added. “A woman also has a right not to be raped.’’

‘Let the people Mr Halligan asked Taoiseach Enda Kenny to support a constitutional referendum to allow for abortion in cases of rape and foetal abnormalities. “I am calling on the Taoiseach to let the people, not party politics, to decide this issue,’’ he added.

Mr Kenny said he had absolutely no intention of playing party politics with a matter as sensitive as abortion.

He said the heads of the Bill had been approved by the Government and sent to the Oireachtas health committee to be discussed. After the committee hearings, the Bill would be drafted and debated by the Oireachtas.

“When Deputy Halligan speaks of warped justice, the Oireachtas has no input in the decisions made by the courts, which are completely independent in the way they do their work and the decisions at which they arrive,’’ he added.

“While people might have a view of the decisions taken by the courts, that is the courts’ independent decision.’’

“It is within these confines that the heads of this Bill have been approved by the Government and will follow through the process.’

“That does not involve anything extraneous like what the deputy mentioned in terms of foetal abnormalities, rape, incest or whatever.’’

The Taoiseach said the people had voted on the issue in the past. “They made their intentions very clear in that the right to travel was given specifically to women.

“While people may have different views on this, the fact of the matter is that a woman in this Republic can only have access to termination where there is a real and substantial threat to her life.’’

Mr Kenny said the circumstances in which that arose were emergency medical risk and the risk from suicidal intent which was a very different issue from suicide ideation.

He added that the Government was focused on dealing with the matter within the Constitution and the law.

“There is no change, nor will there be any change, in the work that is going on here to that,’’ he added.