Tánaiste declines to respond to US Congress ‘veiled threat’ 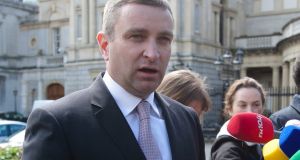 Tánaiste Simon Coveney declined to respond when asked the Government’s attitude to a “veiled threat” by 10 US members of Congress about the controversial Occupied Territories legislation.

In the Dáil on Wednesday, Fianna Fáil foreign affairs spokesman Niall Collins asked about the letter members of Congress had written to Taoiseach Leo Varadkar after the Dáil voted last month to allow the Control of Economic Territories (Occupied Territories) Bill to progress to committee stage which deals with amendments.

The Bill, already passed by the Seanad, aims to ban the importation or sale of goods or services from settlements condemned by the United Nations and European Union as illegal.

Mr Collins, a supporter of the legislation, introduced the Bill in the Dáil.

The Tánaiste and the Government oppose the Bill on advice from the Attorney General that it is not sound and could result in major fines from the EU.

During debates on the legislation, Mr Coveney had warned it could place a strain on Ireland-US relations.

In the letter, the Congressmen - including Irish-American Peter King and chairman of Congress’s foreign affairs committee Eliot Engel - expressed concern that the Bill would have “potentially severe implications” for Ireland’s economy should it become law.

The letter points out that US companies account for two thirds of all foreign direct investment in Ireland and tech giants Apple, Google, Facebook and Microsoft had a major presence in both Ireland and Israel.

Mr Collins asked if the Government would respond to the letter, “which is being viewed by many as a veiled threat to Ireland”.

Mr Coveney was answering questions about the meeting in Dublin he organised between a number of EU and Arab foreign ministers to discuss the Middle East process.

He said the meeting was “with countries that want a viable solution for both Palestinians and Israelis” but had a big focus on the Palestinian perspective as part of that discussion.

However, he declined to comment on the US Congress letter.