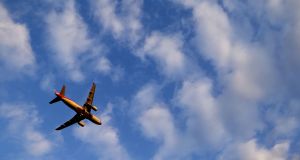 Minister for Finance Michael Noonan has said the air travel industry may be considered to be under-taxed and the ability to apply the tax should remain in order to raise revenue. File photograph: Andrew Harrer/Bloomberg 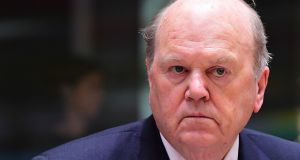 Minister for Finance Michael Noonan: the air travel tax is a “useful tool for raising revenue and paying for externalities associated with air tax”, he said. Photograph: Emmanuel Dunand/AFP/Getty

Minister for Finance Michael Noonan has raised the prospect of reintroducing the air travel tax, claiming the aviation industry is under-taxed.

Mr Noonan was responding to a report from the National Civil Aviation Development Forum brought to Cabinet by Minister for Transport Shane Ross this week.

The report recommends the levy, which was reduced from €3 per passenger to zero in 2014, be formally abolished.

Mr Noonan strongly rejected the proposal, insisting the levy has no impact on the aviation industry. He said the tax was a “useful tool for raising revenue and paying for externalities associated with air tax such as emissions, noise pollution, etc”.

He said the industry may be considered to be under-taxed and the ability to apply the air travel tax should remain in order to raise revenue.

Aviation tax was introduced in 2009 but, after heavy lobbying from airlines, it was reduced to zero in 2014 by Mr Noonan. While the levy was liable to the airline and not the customer, it was usually reflected in the price of a flight.

The aviation development forum was established in 2016 following Britain’s vote to leave the European Union. It comprises senior representatives in Irish aviation and is chaired by the Department of Transport.

The forum is tasked with examining how the industry can grow and how to introduce enhanced competitiveness to the market.

The body makes a number of other recommendations including refunding trainee pilots who pay for their own training. Currently airlines can submit training costs as a deductible expense for tax purposes.