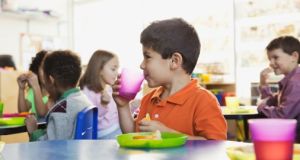 Minister of State Simon Harris, speaking before the budget speech, said the €39 million for school meals in 2015 provided food services to some 1,700 schools and organisations and benefitted more than 217,500 children. File photograph: Getty Images

A call has been made for an “open and transparent tendering process” for the school meals programme, which is receiving an additional €3 million in the budget.

Speaking before the Budget 2016 announcement, Labour Senator John Whelan said “there is quite a bit of money involved”, adding that it was important “that we have value for money and an open and transparent process”.

He described the school meals programme as an “undervalued and unsung success story” in the State’s social protection and education systems, which deserved more resources.

Mr Whelan appealed for increased funding for the scheme and “an open and transparent tendering process”.

He made the appeal before the budget speech started in the Dáil. Under the budget an additional €3 million in funding is to be provided, on top of the 2015 €39 million allocation.

He said: “The bottom line is that in this day and age no child in Ireland should go to school or go through the school day hungry.”

Seeking the increased funding, the Laois Senator appealed for an increased emphasis on breakfast clubs.

He stressed: “We must also ensure that good quality meals are being served to the children - that they are of a high nutritional value and that it is not just tokenism.”

Minister of State Simon Harris, speaking before the budget, said the €39 million for school meals in 2015 provided food services to some 1,700 schools and organisations and benefitted more than 217,500 children.

Mr Harris said the programme was an important element of policies to encourage school attendance and extra educational achievement by children, especially those from the most disadvantaged backgrounds.

He said the extra funding of €2 million provided for in 2015 was used to increase payments to Deis schools, with a particular focus on breakfast clubs.

“There is clear evidence that good nutrition improves the concentration levels of students, and breakfast clubs are particularly effective in this regard.”