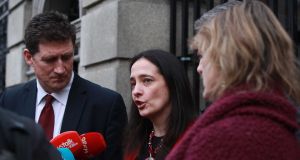 Rogue developers who build defective homes “should never be allowed to build again”, Taoiseach Enda Kenny has told the Dáil.

He said an independent inspector should say when builders get it wrong that “that is not what they got permissions for, that is not the standard, and they must take it down and rebuild it”.

Mr Kenny said the regulations existed but were never implemented. When planning permission was issued for major developments, it was “very simple to have a clerk of works appointed to supervise the job and, where greed arises or contractors decide to cut corners, order them to take the development down and rebuild it properly”.

Green Party deputy leader Catherine Martin raised the issue of families whose “dream homes” were defectively built by “inept, incompetent, greed-driven building standards that were not properly regulated by the State”.

The latest reported incidence of defects has been reported at an apartment block in the Beacon South Quarter in Sandyford, in Ms Martin’s Dublin Rathdown constituency. “There is a duty on Government to protect its people against incompetent rogue cowboy builders,” she said.

Many builders and developers had gone bust but “our forgiving corporate insolvency laws allow them to return to the workforce”.

Ms Martin said they were given a fresh start but individuals who bought homes and “who do not enjoy the protection of the corporate veil, are abandoned”.

The Green Party TD said that in the five years since the Priory Hall controversy there was still no statutory remedy or support for people who found themselves in this situation.

The only law reform that had been made was in building control, “with zero new remedies for consumers, no regulatory body for contractors, and no dispute-resolution scheme for the people of this country when defects emerge in their homes”.

She added that families were often statute-barred from taking cases against builders because the defects were not noticed by homeowners in the legally stipulated period. There were still no solutions for people whose homes were built pre-2014.

Ms Martin called on the Taoiseach to review the causes of house failures that had come to light in recent years and set out a strategy for dealing with housing defects to include statutory protections for homeowners.

Where rogue contractors, either through greed or taking short cuts, put defective buildings together, or fire traps as was the case in Priory Hall, “they are guilty of a grossly serious offence”, the Taoiseach said.

“In my view they should never be allowed to build again or not for a very long time. Their certificates of competency should be withdrawn.”

Mr Kenny said that if somebody signed off on a certificate saying a building was of a quality that it was not, “that person should pay the penalty as well”.

He said things had changed and engineers were required to sign off on certificates of standards.

He said he could not say there would not be other Priory Halls, Longboat Quays or other instances.

The Taoiseach told the Green Party TD that the issue and what should be done about it were a focus of the Minister for Housing. He said a supervisory authority needed to be appointed independently or by the local authority that granted the planning permissions in the first place.