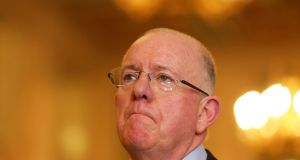 Minister for Foreign Affairs Charlie Flanagan: “The controversy concerning the substance of the RHI scheme is a matter solely and exclusively for the devolved institutions, and not something on which I, or the Government, would comment.” Photograph: Justin Kernoghan

Minister for Foreign Affairs Charlie Flanagan has refused to be drawn on the northern political controversy surrounding the Renewable Heat Incentive (RHI) scheme.

“The controversy concerning the substance of the RHI scheme is a matter solely and exclusively for the devolved institutions, and not something on which I, or the Government, would comment,’’ he said.

He told the Dáil he regretted the circumstances which led to the decision of former deputy first minister Martin McGuinness to resign from office.

He said he acknowledged Mr McGuinness’s contribution and leadership over the past decade within the powersharing institutions.

He also offered his congratulations to the new Sinn Féin leader, Michelle O’Neill.

Sinn Féin spokesman Sean Crowe said it was generally accepted the DUP had failed to live up to its obligations on equality, respect and reconciliation.

“The RHI scheme and the arrogance of the DUP has further undermined and led to the collapse of the political institutions,’’ he added. “Arlene Foster was the architect of the scheme.’’

Mr Crowe said it had the potential to cost the public purse in the North almost €500 million. “Sinn Féin cannot and will not tolerate, or turn a blind eye, to financial scandal.”

Mr Flanagan said he regularly discussed the political situation in Northern Ireland with its secretary of state James Brokenshire.

“It is important that the conduct of the elections is such that all parties ultimately elected to the assembly have a responsibility towards establishing a working executive in accordance with the Good Friday [Belfast] Agreement,’’ he added.

He said he looked forward to playing his part and the part of the Government as co-guarantor of the agreement. “Ultimately, there will be an obligation on those elected to the assembly in March to sit down and work out a programme for government, re-establish the executive in accordance with the terms and conditions of the agreement.’’

Risk of people travelling from Donegal to drink in Derry bars, says Scally 07:56
Smoke from solid fuel fires and stoves killing 1,300 a year, EPA says 08:11
A selection of popular graduate programmes 07:48
What was it like to graduate in 2020? 07:45
Graduate employment: getting the right fit 07:39