Seanad report: ‘If any culling is to be done, it should only be of non-indigenous sika species’ 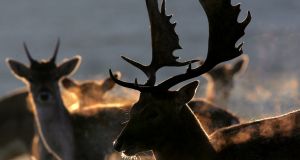 He said a detailed report of at least one alleged instance in which a red deer was shot by a hunter-tourist - who paid thousands of euro to a commercial company - had been made to the Department of Heritage.

“If any culling is to be done, it should only be of the non-indigenous sika species and not red deer.’’

Mr Coghlan said only aged or infirm red deer should be culled. That species had increased from 60 in 1970 to 600.

Fianna Fáil Senator Ned O’Sullivan said he was concerned about reports suggesting the hunting of the Killarney red deer had now become “a purchasable pleasure’’.

It had been suggested a licence could be purchased for €5,000, he added.

Mr O’Sullivan said Minister for Heritage Heather Humphreys should address the Seanad on the issue.