Plenty of parking as Enda goes boldly into fiscal space 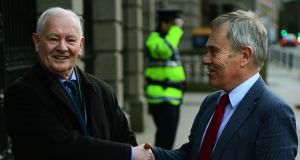 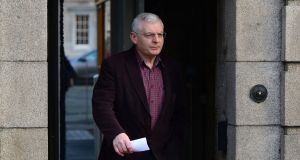 Leinster House was quiet on Tuesday. An air of calm enveloped the chamber and the corridors.

But it was a strange sort of stillness, like that awful hush in the airline cabin when your shuddering plane descends into crosswinds again for another ropey attempt at landing.

Que sera, sera. It’s all in the lap of the gods now. Of course, the fact that so many deputies were missing also contributed to the tranquillity.

The Taoiseach may have decided to string out his Government’s last few hours for another day, but a large proportion of TDs had already run to the country. For once, there were plenty of spaces in the car park.

It was mid-morning before unofficial confirmation leaked from the Cabinet meeting that Enda would not be pulling the plug just yet. And it was mid-afternoon before the Taoiseach officially confirmed it via a statement to his local radio station in Mayo.

One in the eye for the uppity pol corrs in Dublin.

Put the kettle on, Michael D. Enda is coming up to you. He says he needs a spot of dissolving work done on the 31st Dáil.

While subdued politicians contemplated fate and feet (campaigns require a lot of walking), the overstretched Oireachtas porters hadn’t any time to stop and think about what the future might bring. They were too busy bringing trolley-loads of stationery and office supplies outside to deputies’ cars.

The rush to get the last of the Oireachtas envelopes went into overdrive. TDs and Senators get a monthly allowance of prepaid envelopes, but they can’t collect them before the new month starts. So the clamour for them began two days ago on February 1st, with politicians determined to get every last ha’penny worth of paper due to them before the shutters come down with the dissolution of the Dáil.

People wondered why Enda bothered hanging on for the extra day before finally raising the general election flag.

Some thought he did it just to annoy the Minister for the Environment, who appeared to think he had a crucial say in the timing of the election because he is the Minister who has to sign off on the running order.

Two obvious reasons happened outside Leinster House and involved good news announcements on the economy front. The Coalition were happy to have this information freely ventilated in the media before getting buried in the avalanche of election coverage.

And so the latest exchequer returns (very good) were published, along with very complimentary remarks from a very pleased Michael Noonan.

Meanwhile, Ministers Richard Bruton (FG) and Ged Nash (Labour) were allowed leave an ongoing Cabinet meeting to stand near the big steps of Government Buildings and on the glad tidings of the latest unemployment figures, which have dropped again.

Our figures are nearly as good as the ones in Germany, boasted Nash, and that country’s unemployment rate is the lowest in its history.

Then they both talked about the fiscal space, which is the final frontier of this election as Enda tries to boldly go where no Fine Gael leader has gone before and win a second consecutive term in office.

They didn’t care about the date of the election, or when it might be called. Richard just wanted to spread the message of recovery and whatever else has been drummed into the FG troops.

It made no difference to Ged either. “I was ready for a November election.”

The Opposition firmly believes Enda stalled on naming a date because he wants the election campaign to be as short as possible.

Fianna Fáil summed it up succinctly in the title of a press release: “Short campaign must not be an excuse for hiding Enda.”

Half an hour later, Sinn Féin launched a billboard. Everyone is launching billboards. This one was all about the fiscal space. But they didn’t mention the words. “Fine Gael Can’t Count,” it said, beside a picture of a broken calculator.

So the Dáil began a pretend “normal day”. Not much work done. Minds elsewhere.

At the start, so few deputies came into the chamber that a quorum had to be called. Fine Gael TDs and Ministers belted in from everywhere, putting up a fine show of strength, bearing in mind their depleted ranks. So for a few moments, the Opposition thought this presaged the arrival of Enda, who would be making an announcement.

“If the Taoiseach comes to the Dáil, I will be happy to give way to him at any stage during my question,” said Fianna Fáil’s Billy Kelleher. He didn’t have to.

The gun-jumpers who put up their posters too early scrambled their party workers to take them down from the mast before the county council saw them.

Then the ESB issued a press release warning party workers against taking dangerous liberties with electricity supply poles when putting up the posters.

Joe Higgins was star of the afternoon. And why not? He’s finishing up in the Dáil and after a long career.

The Ceann Comhairle called for some hush for him. “Please, please. Deputy Higgins is leader of his party. He is probably standing for the last time on the Order of Business and I want quietness and attention for you now and to wish you every success in your retirement.”

“On your way to the Park, Taoiseach” asked Joe, “in case you meet an anti-water charges protest, can I suggest that you take your AK47 for protection?” Judging by what he [Alan Kelly] had to say to the Sunday Business Post, he has so much energy he could do with a run around the park before he’s unleashed on the unfortunate people of Tipperary.

Joe added: “I wish everybody the best and I wish nobody ill but I can’t wish anybody here good luck in the next four weeks for obvious reasons, politically speaking.

“But Taoiseach in the terms of the last five years, and what dominated this Dáil, would you like to say sorry to the people for making them pay the bankers’ debts or the savage austerity over that period of time?”

Hatchets and knives seized after scuffles at funeral 15:59
HSE concerned intellectually disabled man living in ‘squalor’ 15:31
Sourcing equipment to protect against coronavirus a major challenge - HSE 15:29
Dublin's long-awaited Liffey cycle route to be in place by August 15:12
Boy who lost part of foot in lawnmower accident settles case for €725,000 14:50