Opposition challenged to name rulings influenced by how judges appointed 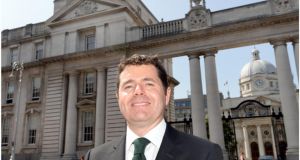 Minister of State Paschal Donohoe, who made the challenge during a debate about depoliticising how the judiciary is selected. Photograph: Brenda Fitzsimons / The Irish Times


Minister of State Paschal Donohoe challenged the Opposition to name a court ruling that had been influenced by the method of appointing judges. He made the challenge during a debate about depoliticising how the judiciary is selected.

Mr Donohoe claimed legislation introduced by Independent TD Shane Ross to ensure appointments were non-political would “ensure its overt politicisation”.

Mr Ross had told the Dáil the selection of the judiciary had been part of the “spoils of war” since the foundation of the State, and such appointments “have been dished out as rewards to those who have been loyal to political parties” during elections.

Mr Ross was introducing his Thirty-fourth Amendment to the Constitution (Judicial Appointments) Bill, which he described as an attempt to appoint people independently.

The current system was established in 1995 “following a political spat between Fianna Fáil and the Labour Party” over the appointment of the president of the High Court Harry Whelehan. The Judicial Appointments Advisory Board was set up to give the impression that appointments were on merit but it was a “fig leaf”.

His Bill would replace the advisory board with a council drawn from a “broad spectrum of society” but no judges or members of the Bar Council or Law Society. An Oireachtas committee with an opposition majority could interview the candidates.

However Mr Donohoe said such a committee would ensure “overt politicisation” albeit by members of non-government parties. He challenged Mr Ross to give a “single example of where the method of appointing individuals to the judiciary influenced the decisions they have made”.

The judge withdrew from a case involving CRH after it emerged that he had bought a second tranche of shares in CRH shortly after the case commenced. Before the start of the proceedings he had declared he had shares and neither side objected.

Appointment process
Fianna Fáil justice spokesman Niall Collins said in defence of the current advisory board, no appointment process would have screened what the only two judges removed from their positions, Brian Curtin and Heather Perrin, “were up to”.

Sinn Féin’s Caoimhghín Ó Caoláin said future judges should be drawn from a “wide pool that fully represents the community as a key step towards the eradication of a corrosive and unaccountable system of patronage”.

Independent TD Clare Daly said the reverence towards judges was unhealthy in any society claiming to be democratic.