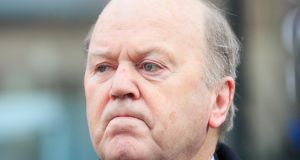 Minister for Finance Michael Noonan told Mick Wallace TD: “I think you have a problem with Cerberus and you should declare an interest rather than act here as a neutral observer commenting for the public good.” File photograph: Gareth Chaney/Collins

Minister for Finance Michael Noonan has challenged Independents4Change TD Mick Wallace to “declare an interest” when he criticises US fund giant Cerberus.

Mr Noonan made his remarks in the Dáil when Mr Wallace criticised the fund and said the State had sold a “large slice of Ireland to vulture funds for a fraction of its value”.

The Wexford TD said Cerberus had bought par-value loans of more than €25 billion for a fraction of what they were worth “and it has wreaked havoc”.

He said it beggared belief that nobody had taken Nama, the National Asset Management Agency, to task over its sale of books of impaired loans to vulture funds.

Mr Noonan said the TD had made similar allegations on a number of occasions. “I think you have a problem with Cerberus and you should declare an interest rather than act here as a neutral observer commenting for the public good.”

Mr Wallace said “I’ve a lot of problems with Cerberus.”

In December 2016 he was declared bankrupt arising from a €2 million judgment obtained by Promontoria (Aran) Ltd, owned by Cerberus.

The fund is at the centre of allegations he made in the Dáil about the acquisition of Nama’s entire €5.7 billion Northern Ireland portfolio, Project Eagle.

The Wexford TD claimed after the judgment that the fund moved to declare him bankrupt after he began to make allegations against Cerberus.

Mr Noonan told Mr Wallace he was a great man to make claims “under privilege”, but the Independents4Change TD said he had a lot to say about the fund outside the Dáil as well.

“You’re a great man to make assertions under privilege but it’s true you have an interest and you should declare that interest, and then we would all know where we stand.”

Mr Wallace replied: “There are few people around who will stand up to it.”

His Independents4Change colleague Clare Daly said: “The Minister’s fond of making points under privilege himself that he would not utter outside this House. However, the truth will out.”

Mr Noonan in turn was accused of sounding like “Pontius Pilate as he washed his hands” of the issue of tens of thousands of homeowners’ loans being sold to vulture funds.

Sinn Féin finance spokesman Pearse Doherty made the claim after the Minister said he did not have a role in Nama’s commercial decisions.

Mr Noonan said the agency was established as an independent body and it was operating within its mandate and progressing its objectives.

He also said he had no role in the banks’ commercial decisions either. Despite the State’s shareholding in the banks, “I must ensure the banks are run on a commercial, cost-effective and independent basis to protect their value as an asset to the State”, he said.

Mr Doherty had called for the Minister to instruct the banks and Nama not to sell loan books to vulture funds. He claimed none of the vulture funds were regulated and none of the credit-servicing firms had been regulated under the new standards that now applied.

“The Minister sounded like Pontius Pilate as he washed his hands of this issue,” he claimed.

He said it was not true for the Minister to say he did not have a commercial relationship with the banks. He claimed the Minister’s position “was that Nama should not involve itself in housing if it meant the agency would repay its debts more slowly”.

Mr Doherty said the Minister was going to sit back and allow the banks to sell people’s homes to vulture funds. A huge amount of damage had already been done and a reported 46,000 to 90,000 mortgages were to be sold, he said.

It was not credible that the Minister had no responsibility or role in this regard, he added.

The Donegal TD said the Minister had directed Nama to hold the IBRC loan and has given similar directions on numerous other occasions. “You can have a commercial role in regard to Nama and you can issue directions, but you refuse to do so,” he said to Mr Noonan.

The Minister said the fact that Mr Doherty put incorrect information on the record did not make his arguments correct. Mr Noonan said he had always stated that he had certain responsibilities for Nama under legislation, but that did not give him power to interfere in commercial decisions.