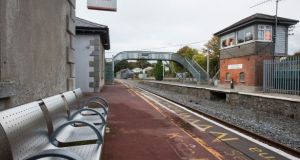 No decisions will be made on rail line closures without public consultation, according to Minister for Transport Shane Ross.

“The consultation will give the public and other interested parties the opportunity to see the analysis of rail funding,” he said.

A review, by the National Transport Authority and Iarnród Éireann, is to be published next week. It is understood to have warned the funding gap will have to be met by the closure of some of the existing rail network in the absence of additional Government resources.

Mr Ross told the Dáil on Wednesday the review identified a funding gap for Iarnród Éireann based on the project allocations prior to the budget, which provided more than €50 million next year.

Fianna Fáil transport spokesman Robert Troy accused the Minister of sitting on the report for months, adding its leaking to the media had undermined the Oireachtas.

He asked if Mr Ross could rule out rail closures, “full stop”.

The Minister said he would reject the claim it was in anybody’s interest that the report appear in the media.

Denying he had sat on it for months, Mr Ross said it would have been brought to Cabinet this week but the meeting was curtailed because of the gathering on Brexit in Dublin Castle.

He said time was required to consider such a serious report.