Miriam Lord: The scene of this man’s death seems more shocking than the manner of it

Jonathan Corrie was not the first homeless person to die in Dublin, he won’t be the last

People hold a candlelight vigil outside the Dail, to pay respect to Jonathan Corrie, who was found yesterday morning just metres from the gates of the political establishment. 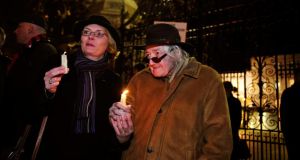 Gráinne Byrne and John Kelly pictured at a candlelight vigil outside the Dáil in response to the death on Molesworth street of Jonathan Corrie who was homeless. Photograph: Aidan Crawley/The Irish Times

Out of sight need not be out of mind, although location can be helpful to Government politicians when unpalatable truths arise.

But not on Monday, when a man named Jonathan Corrie was found dead when sleeping rough in the shadow of Leinster House.

He’s not the first homeless man to die in the winter cold city. He won’t be the last.

They usually get a few paragraphs in the paper. News features are written. Now and then the problem is raised in the Dáil and the Government is always working on it.

Peter McVerry and Sister Stan and the people from Simon do the rounds. Again. Because if they don’t, nobody else will.

On Monday an addict who had reached rock bottom was found dead on a Dublin street. What made his death so different?

Jonathan Corrie’s chaotic life ended in a doorway that most of us know – even those people who have never set foot on Dawson Street.

During routine broadcasts from outside Leinster House, or major political occasions such as budget day, TV crews routinely station themselves on those granite steps in front of that pale blue door and broadcast to the nation.

And in a strange sort of way, it seemed around the corridors yesterday that the scene of this man’s death was more shocking than the manner of it.

For a man who never had much of it, Jonathan Corrie’s death was too close for comfort.

By mid-afternoon a decision was taken to postpone the planned turning on of the Oireachtas Christmas tree lights.

This is always a jolly event, with carols and light-hearted speeches and a temporary cessation of political hostilities between party leaders for the duration of the ceremony.

It wouldn’t have looked right – a minor hooley happening on the lawn at the back of the building while a candlelit vigil was taking place outside the front gates to mark the sad death of Jonathan Corrie.

Meanwhile, topics that may have been on the cards for Leaders’ Questions were shelved, with all the Opposition speakers calling for immediate action on the homeless issue.

As subjects go, homelessness never gets them particularly exercised in the Dáil. You don’t tend to get blazing rows or impassioned speeches.

Yesterday afternoon, for all the urgency brought about by death on their doorstep, the exchanges were sincere but lacked the punch and edge so in evidence during the Irish Water debates.

The Taoiseach seemed more interested in addressing the immediate issue of how to alleviate the situation of people who sleep rough. It’s a complex area and one which can’t be easily addressed.

And he recalled, not for the first time, the woman who lived in a cardboard box in Kildare Street back in the 1970s. She rebuffed all offer of help, said Enda.

So you see, it isn’t all about money, he argued, before outlining details of the Government’s ambitious housing policy. On the day that was in it, he also entered the chamber armed with the numbers of emergency housing places which are being rolled out .

Micheál Martin felt it didn’t say much for the Government’s commitment to easing the homeless crisis when they didn’t see fit to consult the likes of Peter McVerry or Simon before they launched their policy.

Furthermore, the Taoiseach’s priority over the weekend was “to reduce the top rate of tax and look after the very wealthy”.

Enda seized on the mention of tax cuts, although Martin’s main question was about the homeless crisis.

“I’m also quite incredulous that you just leave the death of a man in a doorway as just an issue passing by,” declared the Taoiseach, with no small amount of cheek.

Micheál snapped to attention. “”Wha? What did you just say?”

“This is not a question of money but of managing effectively to have as many people as possible off the streets,” sniffed Enda.

Gerry Adams had visited the doorway across the road from Leinster House. He read some of the messages from the bouquets left by the public.

Catherine Murphy of the technical group pointed out she has been raising the issue in the Dáil for the best part of two years.

Hardly a day goes by when she doesn’t meet a “functioning family” in despair and disbelief because they are about to lose their rented home.

”Taoiseach, I believe this is about money” she told him.

She wanted to see a real “sense of outrage” from him.

”Is there anything more fundamental than having a roof over your head?” she asked.

The Dáil moved on to debate Irish Water again.

The school choir from Derry didn’t get to sing.

The lights didn’t go on.

And around the front of Leinster House, a group of about 200 people stood in silent vigil, holding nightlights.

And just a few yards away, workers passed the spot where Jonathan Corrie died and paused for a little while, looking at the floral tributes and spluttering candles.

It was very cold.

His homeless friends stayed behind.