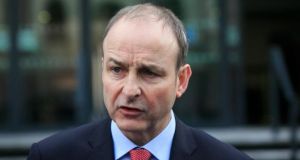 Minister for Education Norma Foley will make a statement in the Dáil tomorrow and answer questions on the row over the reopening of special needs schools and classes after a failure to agree that direct education would recommence on Thursday.

The news emerged as a call was made for Taoiseach Micheál Martin to intervene in the controversy. Labour education spokesman Aodhán O Riordáin claimed Ms Foley and Minister of State Josepha Madigan had “lost control” of the situation and were now part of the problem, after the plan to reopen direct teaching for 18,000 students had to be abandoned.

He said comments made by the two Ministers were “deeply, deeply unhelpful”, claiming they had shown “bad faith” and that when the first announcement was made about reopening there was no consultation and in later announcements no agreement on reopening of classes.

Earlier, Sinn Féin leader Mary Lou McDonald accused the Government of “incompetence” on the issue and claimed Ms Foley had twice promised and twice failed to reopen schools and classes for students with special needs.

She said that Ms Foley, in media interviews after a decision to abandon the planned return to school, “was finger-pointing” and seeking to scapegoat special needs assistants (SNAs), teachers and unions and “everyone else except themselves in this fiasco”.

Mr Martin rejected as “absolutely untrue” claims the Government did not consult, pointing out the general secretary of the Irish National Teachers’ Organisation (INTO) stated last week “there would definitely be schools opening” this week.

He said Ms Foley would lead in the talks and had acted in good faith on the issue. “The wherewithal wasn’t there to get a critical mass there to get schools open,” Mr Martin said, adding they should work together without apportioning blame.

Mr Martin said some 14,000 personnel participated in the online seminar on the reopening of schools and that showed the interest and anxiety over the issue.

However, the Sinn Féin leader, pointing out schooling for those with special needs was continuing in Northern Ireland and across Europe, accused Ms Foley and Ms Madigan of “seeking to gazump each other” in announcements about schools reopening.

Ms McDonald told Mr Martin “the responsibility for this mess lies squarely with your Government. You told everyone education was a priority. You failed to put anything resembling a plan in place”.

She said a “plan B” should have been on the shelf and ready since August for the possibility of high infection rates affecting school openings.

Claiming there was no consultation with teaching partners Ms McDonald accused the Government of policy by press statement and of seeking to “bounce” unions, teachers and SNAs into reopening.

The Ministers acted in “bad faith to give these children the impression that they would be back in school when the work was not done to ensure the schools were safe” and that all people delivering that plan were on board with the decision.

But the Taoiseach said it was “absolutely untrue” there was no consultation about the reopening of special needs schools and classes.

The Taoiseach said Ms McDonald was being “overly partisan and political”, and that the Government worked in good faith and it was “wrong to play politics with children with special needs”.

“And even since last night there were extremely ill-advised comments from the department with quotes from both Ministers with finger pointing all over the place,” the Labour spokesman said.