Government did not shift from position on Garda inquiry commission, says Kenny 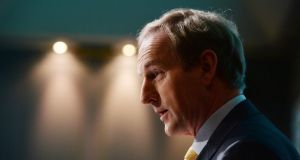 Enda Kenny: Called Mr Shatter out of a parliamentary party meeting last year to ask him how he was getting on since he was no longer minister for justice. Photograph: The Irish Times

All correspondence with the legal firm of former minister for justice Alan Shatter about the row over debating the establishment of an inquiry into allegations of Garda malpractice in the Cavan-Monaghan district.

Taoiseach Enda Kenny said in the Dáil on Tuesday that he had asked his officials to publish the letters between Mr Shatter’s legal firm Gallagher Shatter and the Department of the Taoiseach.

He said they would be published on the website merrionstreet.ie later today.

The Taoiseach made the comments in response to Fianna Fáil leader Micheál Martin who asked if Mr Shatter as a TD had approached the Taoiseach or the Minister personally about the investigation.

Mr Martin raised the issue during leaders’ questions and after Ceann Comhairle Sean Barrett withdrew remarks he made last week that the Opposition sought to undermine him in the row over whether a debate could be held on the establishment of the commission of inquiry.

He said he had called Mr Shatter out of a parliamentary party meeting last year, to ask him how he was getting on since he was no longer minister for justice.

“We did not discuss the question of terms of reference from the Guerin inquiry.” He said that was a matter for Government, which had consistently followed through on passing terms of reference “so that the commission of investigation can continue”.

Mr Kenny said the Government was not shifting from its consistent position that the commission of investigation should be able to consider how serious issues were dealt with by the gardaí, by the Department of Justice and by the former minister for justice.

Sinn Féin leader Gerry Adams said the Taoiseach had repeatedly refused to answer his questions about whether Mr Kenny, his department, the Ceann Comhairle or any other agency had received any correspondence from Mr Shatter and had only done so when pressed.

And now they were hearing about “all this correspondence” from and to the former minister.

Mr Adams accused the Taoiseach of “making a virtue out of a necessity” and said he was “now going to publicise the letters as if this was some mighty act of kindness on his part”.

Rather than dealing with the issue transparently, the Taoiseach wanted to “ram the whole thing through”.

Mr Kenny rejected his allegation and said he was not aware the Ceann Comhairle had received correspondence.

He later clarified: “My apologies to you if I wasn’t as accurate there as I should be in respect of a matter being brought to my attention that a copy of the letter that had been sent to the Ceann Comhairle was forwarded to the Department of the Taoiseach with a covering note from the legal firm on December 8th.”

He said it was not a case of a member of Fine Gael being able to prevent a debate.

The Government made a decision to set up a commission of investigation and “ignored and did not take into account submissions being made for the exclusion of the former minister for justice from the terms of reference”.