Opinion: closing off the option of reform shows disregard for the people’s wishes 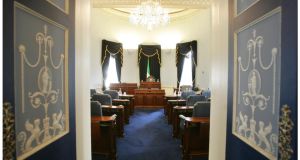 We should make the Seanad responsible for more exercises in participative democracy. Photograph: Alan Betson

Richard Bruton is saying that our choice in this referendum is limited to either abolishing the Seanad or keeping it in its current form. But by what authority do Fine Gael and Labour rule out the possibility of reform? We surely still live in a Republic, where it is the people who in the end decide what can or cannot be changed in our Constitution.

The more the Government refuses to even consider the option for reform, the more the case for a No vote grows.

What populist illness has overcome Fine Gael and Labour whereby the only campaign argument they can muster is that politics is in itself a bad thing? Their only line is that having 30 per cent fewer politicians is by definition good. Where does that argument end? Should we all just bow out and let the Civil Service, judiciary or media take control? Having abolished a whole layer of local democracy and having centralised Government decision-making in a subcommittee of four, they now want rid of the Seanad. I am afraid I don’t trust them with yet more power. I think we should take some back and give the people the power to elect the Seanad.

They push the false conclusion that by further centralising power we will adopt some sort of slimmed down Swedish political model. But we all know that our problem has been an absence rather than excess of politics. We don’t have enough power at a local level or enough different voices on the national stage. Each international review of our economic crisis comes to the same conclusion. The lack of different views and the groupthink that existed in Irish public debate was one of the main factors that contributed to our economic crash. What we need now is to open up the second chamber so that new voices can be heard. The last thing we should be doing is shutting down debate.

Clear consensus
There will be different opinions as to how this new Seanad should be elected and the powers it should hold. The Green Party has been the only party to take a consistent line on the issue and we look forward to setting out our views during the campaign. But there is already clear consensus among those calling for a No vote on some of the principles that should apply.

Firstly, we all want a Seanad that is directly elected by the people rather than by some chosen few. Such an election could be held on the same day as a Dáil vote, which would mean it would involve little or no additional cost. Fears that the new chamber might then become a mirror image of the Dáil would be overcome if candidates were not allowed to run for both Houses. Straight away you would have a whole tranche of new people coming into Irish public life. If you aspire to full-time national politics then you go for the Dáil. If you want to make a contribution but not to be a full-time career politician, then the Seanad is the place for you.

A second check against the Seanad becoming too powerful would be for it to have powers to preview rather than review legislation. As a minister I saw the benefits of bringing Bills to the Seanad before bringing them to the Dáil. A new Seanad need not have the same blocking powers that it has today. Being a directly-elected institution would give it authority in its own right. It would then be easier for a minister to accept amendments in a reformed Seanad than it would in a more legally powerful but politically divided lower house. Having such a preview system of legislation would also force the Civil Service and the Government to plan in a more open, orderly and long-term way the legislation they need to get through.

Those who argue that this can be done at a lower cost in a Dáil committee don’t realise how the workload of those committees has expanded. Those committees have already proved incapable of providing effective oversight of legislation coming from Europe. What will happen when they are asked to take on the role of a second chamber, while having 30 per cent fewer members? Far better to keep the Seanad and give it an expanded role which includes bringing our MEPs home regularly to explain what is happening in Brussels and to answer questions about positions they are taking on our behalf.

Future of the House
There is one other job that a reformed Seanad could take on. There appears to be a general consensus that the constitutional convention has been a success and that we could use more of such participative democratic initiatives. We should give the Seanad responsibility for making that happen rather than leaving it in government control.

Of course that could only happen once the future of the Seanad is decided. The institution will not change itself and this Government is refusing to even consider reform. But people have the power to insist on such change. The Government could not dare to ignore the will for real reform that a No vote would represent.

They are running with the simple line, “We don’t like politicians, Here is a chance to get rid of some.” The No campaign on the other hand is calling for a new directly-elected Seanad, that complements rather than competes with the Dáil, which provides a link to Europe and which brings more not fewer people into our national debate. You decide.

Eamon Ryan is leader of the Green Party