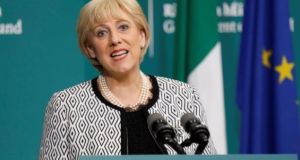 The Health and Safety Authority (HSA) has found a “high level of compliance” across meat processing plants that have been inspected in recent days, the Dáil has been told.

Minister for Business Heather Humphreys said 240 workplace inspections had been carried out which included meat processing plants but she did not have the figures for meat plant inspections.

Sinn Féin spokesman Brian Stanley said these figures should be known but the Minister said this was confidential to the HSA.

The Minister confirmed that 35 outbreaks have been associated with workplaces with 879 employees testing positive of which 828 were in meat processing plants where there were 16 clusters of two or more cases.

Minister for Agriculture Michael Creed said that between 55 per cent and 60 per cent of workers had returned to work.

Labour TD Duncan Smith said he had no confidence that this was the case and claimed that between 70 per cent to 90 per cent of employees in meat processing plants were migrant workers, tied to their employer through their work permits.

He said a “cloud of shame” hung over the industry and called for a task force to investigate their terms and conditions.

The Minister added that the vast majority of people employed in meat plants were Irish or EU citizens. Mr Creed said a task force was not necessary as there was sufficient oversight in place through existing authorities.

Ms Humphreys said migrant workers had full employment rights and were not tied to any one employer, and only about 15 per cent were on work permits and because of this had higher than the minimum wage.

The two Ministers were answering questions in relation to the outbreak of Covid-19 cases among employees in meat factories.

A number of opposition TDs called for meat processing plants to be deep cleaned when positive Covid-19 cases were identified.

Fianna Fáil agriculture spokesman Charlie McConalogue asked “how on earth could it be the case” that a factory was not closed temporarily when Covid-19 cases were detected.

He added that “there are many lessons to be learned here and the Government has to front up in relation to the mistakes they’ve made”.

Mr Creed said however that the outbreak control teams had the authority to close down plants if it was required. He did not agree mistakes were made and said it was an evolving situation.

Mr Stanley highlighted cases where workers were sent back to work before they got the results of tests and then infected others while back at work. He said that in one plant an employee nearly died and in another case a worker was sick in bed but the plant was in constant contact to get him back to work because they were short-staffed.

But Mr Creed said “it’s easy to be a hurler on the ditch and commenting on everyone else’s efforts”.

He said that everyone was trying to do their best and it was in every plant’s best interests to ensure the health of their workers.

“To argue that there’s some kind of conspiracy to damn their workers with Covid-19 would be counter intuitive.”

Rise TD Paul Murphy claimed that in Moyvalley Meats there still had not been an inspection in the plant were Covid-positive employees were working alongside healthy workers.

People Before Profit TD Bríd Smith said the figure that 60 per cent of employees had returned to work masked the dangers involved and the risks to communities around meat plants were shown in much higher numbers of Covid-19 cases.

Mr Creed said the Dáil had been told that the HSA had conducted inspections in meat plants.