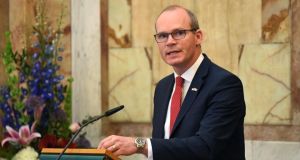 Tánaiste Simon Coveney has said that ‘right from the outset we have been working to ensure that Irish and British citizens in Northern Ireland would continue to access rights and privileges that come with EU citizenship’. Photograph: Clodagh Kilcoyne/Reuters

Tánaiste Simon Coveney has confirmed the Government will cover the estimated €4 million cost of EU health insurance for Northern Ireland citizens after Brexit, if necessary.

If the UK leaves the EU without a deal, British-issued health insurance cards will no longer be valid.

Mr Coveney said it would pose challenges to extend the cover to people in the North because they would no longer be resident in the EU and legislation would be necessary.

The Tánaiste stressed that “right from the outset we have been working to ensure that Irish and British citizens in Northern Ireland would continue to access rights and privileges that come with EU citizenship”.

Taoiseach Leo Varadkar had previously said he wanted these rights to be retained for Northern Ireland citizens after Brexit.

But Mr Coveney’s announcement is the first time the Department of Foreign Affairs has made a commitment to pay for the insurance, which it believes will be about €4 million a year.

The Tánaiste told Sinn Féin foreign affairs spokesman Sean Crowe the Government wanted to make sure people in the North retain the practical benefits of EU citizenship “and if necessary, we will fund that to make sure it’s paid for”.

Mr Crowe expressed concern that elements of the Belfast Agreement involving upholding and respecting people’s identity, allegiances and rights were being dissipated.

The Tánaiste acknowledged that Brexit had caused great uncertainty about future arrangements but he stressed that Irish citizens in Northern Ireland “continue to be EU citizens”.

Anyone born in Northern Ireland has the right to identify as Irish or British or both, thanks to the Good Friday Agreement, a peace deal signed in April 1998 by the British and Irish governments and Northern Ireland’s political parties.

But the Tánaiste told him the Government was “fully committed to ensuring that the vital citizenship and identity provisions of the Good Friday Agreement are upheld”.

Anyone born in the North could through the Belfast Agreement identify as Irish, British or both.

Mr Coveney also said he also wanted to protect the rights of Northern Ireland citizens to participate in Erasmus programmes, where students spend up to a year studying in another EU country.