Aodhán Ó Riordáin in competition with outgoing Senators for nomination 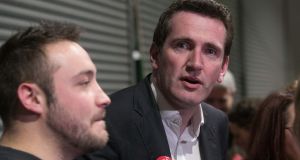 Former Labour TDs Kevin Humphreys and Joanna Tuffy are to compete head-to-head for a single nomination to run for the Seanad.

And Minister of State Aodhán Ó Riordáin, who lost his Dublin Bay North seat in the election, will compete with outgoing Senators Lorraine Higgins and John Kelly for a single nomination to run for election on the Seanad’s industrial and commercial panel.

Kildare South general election candidate Cllr Mark Wall, son of retired TD Jack Wall, is also in the race for the nomination to run on the Seanad administration panel with Ms Tuffy who lost her seat in Dublin Mid-West and Mr Humphreys, who lost his Dublin Bay South seat in the election.

The party’s central council and parliamentary party will decide the nominees, through a postal vote. Ballot papers were issued on Friday.

The outcome, due at the end of this week, will decide who will go forward for next month’s Seanad elections.

The party will not run candidates on the cultural and education panels, believed unwinnable for Labour.

Senator Denis Landy has been nominated to the agriculture panel by one of 11 outside nominating bodies with agriculture and fisheries interests.

Minister of State Ged Nash, who lost his Dáil seat in Louth, was expected to be nominated by the Irish Congress of Trade Unions to the Labour panel.

The deadline for candidates from outside nominating bodies is noon today.

In a long-running tradition the names of the successfully nominated candidates, their panels and the nominating bodies, are printed on postcards which are placed in glassed notice boards on the gates of Leinster House at Kildare Street.

Monday, March 21st is the deadline for nominations from the Oireachtas.

The incoming Dáil, the outgoing Seanad and councillors, an electorate of about 1,200 voters, get to decide on 43 senators. Six others are voted in on the Trinity College and NUI university panels, while the Taoiseach appoints 11.

It had been thought the Government would appoint two senators to replace Taoiseach’s nominees Independent Katherine Zappone and Fine Gael’s Hildegarde Naughten, who were elected to the Dáil. The Labour Party said no decision had been made on replacements as far as it was aware.

The Government parties need the extra two votes for the five vocational panels whose voters are members of the incoming Dáil, outgoing Seanad and city and county councillors – an electorate of about 1,200.

Fianna Fáil has most councillors in the wake of the 2014 local elections, followed by Fine Gael and Sinn Féin.

Ballot papers for the vocational panels will be issued on April 11th, and the poll will close at 11am on April 25th.

For the university constituencies, ballot papers will be issued on March 21st, and the poll will close at 11am on April 26th.

1 At least eight shot dead in German town of Hanau
2 ‘If all the immigrants go back, who will work in the meat factories and do the crap jobs?’
3 A Russian cruiser with ‘cannibal rats’: What other ‘ghost ships’ could be out there?
4 DUP pleads with UK to reduce salary threshold for migrant workers coming to North
5 Person claiming to represent ‘ghost ship’ owner comes forward
Real news has value SUBSCRIBE