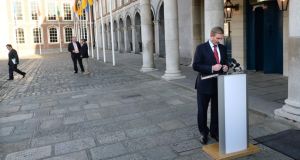 Enda Kenny speaking to the media outside the count centre in Dublin Castle after the defeat of the referendum on Seanad abolition. Photographer: Dara Mac Dónaill

It was a torrid day for unicameralists, the one chamber aficionados. It was an even worse day for Enda Kenny. “Sometimes in politics you get a wallop in the electoral process,” the Taoiseach said after the counting was done.

At least he told the truth of it.

Kenny emerges with his authority dimmed from the unsuccessful campaign to scrap the Upper House. It was he who championed abolition, ran with it in the 2011 election and led the push for a referendum. Now it has failed, he is most closely identified with the defeat.

The Taoiseach now faces the possibility of recriminations on Wednesday when his parliamentary party gathers for its regular meeting. Just one week out from another austere budget and days ahead of the party conference in Limerick, he finds himself in a defensive posture. Like all leaders, he likes winning. He lost this one badly.

Whispers in the back room suggest the top echelon may try to foist blame for the debacle on Richard Bruton, director of elections and Kenny’s erstwhile leadership challenger. In this assessment, the Brutonites might well retort that Kenny should have showed up for a television debate. No-one expects a full-on faction fight, but there is profound concern within the ranks that the campaign misfired badly.

Even the most ardent loyalists say fundamental errors were made by concentrating on the alleged cost savings. While it was perfectly clear that abolition would not eliminate indirect costs attributable to the Houses of the Oireachtas, Fine Gael insisted the economies would still run to €20 million per year. “You can’t put a price on democracy,” said another TD, who happens to be close to the leadership.

The postmortem is now under way in earnest. TDs complain that their concerns about the cheapening of institutional debate with money talk were brushed away. Strategists cited focus group and private opinion poll research, they say.

At the same time, a succession of polls for this paper and others pointed to the likelihood of a convincing and relatively easy victory for the abolitionists. Wrong.

Kenny’s position is not obviously threatened by all of this. Still, the Seanad’s salvation may yet make his job more difficult. It is likely to come up again and again as he seeks to advance other tricky political tasks.

Antagonised
Tension in the party over the abortion legislation is still fresh in memory. With Senators antagonised over the abolition campaign, the Taoiseach must now make peace with them. This referendum result may also provide ammunition to any TD who might challenge the wisdom of any radical departure on any other front. “I think Fine Gael politicians have had enough of referendums,” the second TD said.

Such sentiments could spell trouble for Labour’s push for a vote on gay marriage. Local and European elections next year already present a threat. The Seanad defeat follows the failure of the 2011 vote on parliamentary inquiries, so the Coalition might prefer to avoid any other dalliance with referendum danger.

Kenny also knows that the Labour camp was never as enthused about the abolition proposal as he was. This might yet give Tánaiste Eamon Gilmore leverage the next time the going gets rough. For internal Labour reasons, most of the pressure on the Government leadership has been trained on Gilmore. The Seanad outcome puts strain on Kenny, a rebalancing of sorts.

It seems likely already that the Government will have to grant reform of the Seanad, something it refused to do before the vote. If abolition campaign mounted by Fine Gael and Labour was predicated on the notion of the Seanad’s general uselessness and gaping lack of democratic legitimacy, it would seem vulgar now for them to plead for an unreformed Upper House.

What was saved on Friday is an elitist bastion with a tiny franchise, little real power and a craven history of subordination to the Dáil. Does anyone really see that as the best way forward?

Yet in a time of economic hardship, the result shows is that people were not inclined to accept the Government’s populist invitation to sack 60 politicians.

Credibility
In spite of the Seanad’s lack of credibility and potency, the abolitionists failed to come up with a convincing rebuttal to the “power grab” argument. The argument ran that a wholly improper plot was under way to trample over the little people and entrench the writ of Government in parliament. That this notion was promulgated so successfully by privileged veterans of the political establishment was more than a shade ironic.

The same can be said of Fianna Fáil’s conversion to the cause of the Seanad. Though this might be seen as nothing more than an opportunistic ruse, it enabled Micheál Martin to cast himself as the smiling guardian of the Constitution and the earnest advocate of real reform. It is as well to say that his reformist zeal was not quite apparent when he was in Cabinet for more than a decade.

The other great irony in all this was Sinn Féin’s unlikely alignment with Fine Gael and Labour. But that’s all over now. Normal service resumes tomorrow in Leinster House. It will be a good day for Senators.