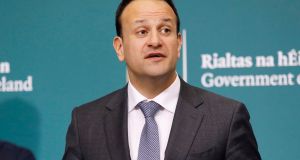 Those who were centrally involved in producing the framework agreement between Fianna Fáil and Fine Gael were fully prepared for the charges that followed its publication.

Opponents and those the Civil War parties want to entice into coalition called the 22-page document aspirational, vague and lacking in any details or costings.

Fine Gael and Fianna Fáil counter that that is precisely the point: it is up to Labour, the Social Democrats, the Greens and Independents to flesh out what were very broad strokes of how a future government may work.

The intent of the document has been widely flagged – a speeded-up Sláintecare to tempt the Social Democrats, a national living wage for Labour and more action on climate change for the Greens – but those smaller parties played coy in the immediate aftermath of its publication.

New Labour leader Alan Kelly criticised its lack of detail, while acknowledging it showed new thinking from Fianna Fáil and Fine Gael, and the Social Democrats said much the same.

The rhetoric of the document – it says the State will be placed “firmly at the centre of the Irish housing market” and that the “importance of the well-resourced, properly-functioning and responsive State has never been clearer” – signals a move leftward, certainly on the part of Fine Gael.

Leo Varadkar and Micheál Martin’s pledges that austerity will not return as the State grapples with the economic fallout of the Covid-19 crisis are borne out: capital investment will continue, if not increase, through borrowing if necessary, income taxes will not rise and core social welfare rates will not be cut.

The deficit caused by the extraordinary spending required to deal with the economic crisis caused by Covid-19 will be reduced “as the economy grows” and will be repaired by “returning our citizens back to work”.

There are likely to be those around the departments of finance and public expenditure who will greet those commitments with scepticism.

Much of what has been discussed and considered between the two parties is left unsaid. The Land Development Agency (LDA), the document says, will be empowered and funded to “build homes on public and private land, to deliver new homes for affordable and private purchase, social housing and cost-rental accommodation”.

Some in Fine Gael suggested this means the LDA, which manages State land, will effectively continue as is; others claimed that it mean the LDA will be overhauled and given more powers, such as those of compulsory purchase.

If smaller parties detect differing interpretations of what has been agreed at this early stage between the Civil War two, it may make them reluctant to enter full government talks, along with other potential reservations.

Those at the top of those parties – Kelly, Róisín Shortall and Eamon Ryan – have all served in ministerial office in coalition with either Fine Gael or Fianna Fáil. They know that even if they enter coalition now, each commitment made in a programme for government in the weeks ahead will be hard fought to see through to implementation.

And all will look over their shoulders to Sinn Féin, primed to attack from the left as leaders of the Opposition.

Yet as they worked to woo smaller parties, the document contains hints that Fianna Fáil and Fine Gael are preparing to criticise those who may be tempted to stay out of government.

The word ‘emergency’ – with a capital E – is weaved through, featuring 20 times, making the unsubtle point that this is a time of crisis which requires serious parties to step up.

In contrast, the word ‘historic’ features only once and the document wisely dispensed with political introspection, even though the coming together of traditional enemies is causing unease in some quarters of both parties.

The brevity with which decades of enmity and rivalry were dispensed is an honest recognition that the differences between the two matter little to the public at large, even if they still matter a lot to the members of each party. The results of the last general election showed that vast sections of the electorate had decided the Rubicon had been crossed four years ago with the confidence-and-supply deal.

One of the important questions remaining is whether both Fine Gael and Fianna Fáil are serious in their positions that a government between them needs a third party to work.

If they fail to attract another partner, the only possible outcomes are a government reliant on Independents or another election.

Both Fine Gael and Fianna Fáil are approaching a critical point in their own histories, and that of Irish politics, at a moment of weakness.

The two forces which dominated Irish politics for so long can now not muster a majority between them and, with yesterday’s document, are going cap in hand to others.