Michael Lowry set to support Government in next week’s budget 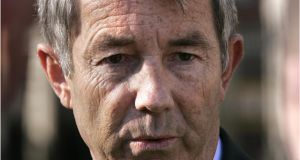 Michael Lowry: he said he approved of Mr Donohoe’s commitment to a cautious budget

Independent Tipperary TD Michael Lowry has indicated he is likely to support the Government in next week’s budget following a meeting last week with Minister for Finance Paschal Donohoe.

Mr Lowry told The Irish Times he would await the details of the budget but that he was disposed to vote for it due to his concern to maintain the stability of the Government.

He confirmed he had a meeting with Mr Donohoe last week. “He gave me an overview of how the budget would be structured. I raised some issues that have been raised with me as a public representative for Tipperary.”

However, he stressed that he approved of Mr Donohoe’s commitment to a cautious budget, and did not seek to go in with a list of demands.

“I don’t believe in threatening or raising the stakes. I understand the need for caution. It would be a disaster for the country if a budget wasn’t passed.”

The departure of Louth TD Peter Fitzpatrick from Fine Gael this week has deepened the Government’s minority status, and it is even more dependent on the support of non-aligned Independents. However, in practice it tends to win important votes with relative comfort as some unaligned Independent TDs either support the Government, abstain or are absent from votes.

The Government’s chief spokesman said on Tuesday that Ministers were hoping for a clear majority on any budget votes, comparable with the 10-vote majority in the Dáil last week on the vote of no confidence in Minister for Housing Eoghan Murphy.

He said all Independent TDs who usually support the Government were welcome to contact the Taoiseach and other Ministers, and their concerns would be responded to.

He confirmed that there had been no change in the Government’s relations with Mr Lowry since his conviction on tax offences earlier this year.

Mr Lowry was found guilty of charges of failing to keep proper books of account, and of delivering an incorrect corporation tax return earlier this year. During the trial a more serious tax charge against the politician was dropped and the jury failed to reach a decision in regard to other charges.

Number of homeless people drops below 10,000 18:15
Election 2020 outtakes: Varadkar’s crafty cup switch 17:51
Tourists with plans to travel to China should be able to cancel at no cost 17:19
Mother of three McGinley children appears in court charged with their murder 17:08
Girl (7) settles case over alleged brain injury at birth for €5.8m 16:55
SUBSCRIBER ONLY