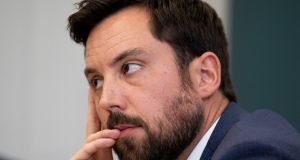 Minister for Housing Eoghan Murphy said the Sinn Féin rent freeze Bill would drive small landlords out of the rental sector and could be deemed unconstitutional in the courts. Photograph: Tom Honan/The Irish Times.

Sinn Féin legislation proposing a three-year rent freeze and a refundable tax credit of up to €1,500 a year for renters has been passed in the Dáil by a margin of 83 votes to 36.

The Government was defeated in the vote on the second stage of the Rent Freeze (Fair) Rent Bill but will not support the legislation moving on to committee stage where the provisions are discussed in detail and amended.

The Bill provides for an immediate freeze on rents for three years on all current and new tenancies and the equivalent for most people in rental accommodation of a month’s rent back in tax relief per year.

Sinn Féin estimates that the legislation would cost the exchequer up to €260 million but would be well worth it because many tenants are paying rents that consume between 40 per cent and 50 per cent of their income.

During a debate on the Bill on Tuesday in the Dáil, Sinn Féin housing spokesman Eoin Ó Broin described the legislation as an emergency measure “to give renters breathing space” and allow the Government time to build more social and affordable housing.

Minister for Housing Eoghan Murphy said the Bill would drive small landlords out of the rental sector, some 80 per cent of which is accounted for by landlords who own one or two rental properties.

Mr Murphy also warned that the legislation could be deemed unconstitutional if it ended up in the courts.

Fianna Fáil, which supports the minority Government in a confidence and supply arrangement, supported the Sinn Féin Bill but said the party would seek amendments to the legislation to provide tax relief for small landlords.

1 Varadkar says Sinn Féin and Fianna Fáil should form coalition
2 Rape victim verbally abused in courtroom after two men are jailed
3 Former UUP leader: Unionism must realise it is no longer a majority in Northern Ireland
4 Forget a grand coalition – here is what the next government will most likely look like
5 Fianna Fáil remains the only game in town for Sinn Féin
Real news has value SUBSCRIBE