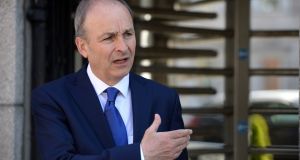 Fianna Fáil leader Micheál Martin said: ‘There has been a significant lack of transparency on this issue.’ Photograph: Dara Mac Donaill / The Irish Times

Fianna Fáil leader Micheál Martin has described the situation in meat processing plants as “gravely serious” and expressed concern that clusters of coronavirus in the factories were not being treated comprehensively.

Mr Martin called for factories to be inspected and said he had “alerted the authorities six weeks or two months ago about the dangers of what could happen”.

He said: “There has been a significant lack of transparency on this issue.”

Rise TD Paul Murphy told the Dáil that 200 complaints had been made about workplace breaches of Covid-19 guidelines including at meat plants but no inspections had been carried out by the Health Safety Authority (HSA).

In reply, however, Ms Humphreys said some of the 200 complaints had been made by people who did not even work at these sites.

Siptu union organiser Greg Ennis said on Thursday the number of confirmed cases in meat processing plans in the Republic had now risen above 600.

Independent TD Carol Nolan said she had been told that 60 workers in the Rosderra Irish Meats plant in Edenderry had now been confirmed as having Covid-19.

Mr Martin said “the situation with meat plants is gravely serious and it is not obvious that these clusters are being dealt with comprehensively.

“Without calling for the shutting down of the sector, it seems very surprising that the blanket testing of a facility is followed by no interruption of work until the results are returned.

“Would it not be reasonable to halt production for a deep clean and putting in place of new control measures while waiting for the results? Simply sending workers back to work and, indeed, not testing their families does not make sense, particularly given the Minister’s assurance that testing capacity is not an issue.”

He said that the number of infections were high in towns across the country where “ordinarily, there would not have been a high incidence of Covid-19”.

“More needs to be done on this issue. The authorities need to visit factory floors to see the reality”.

Mr Murphy later said a complaint was made to the HSE about Moyvalley Meats “that sick workers were working and living alongside other workers”.

There was a number of confirmed cases of coronavirus in the factory. There were reports “some were even doping to keep temperatures down while clearly sick, with management turning a blind eye”, the Rise TD said.

He claimed big businesses were breaking the rules. “That’s 200 groups of workers potentially working in unsafe conditions, 200 appeals to the HSA falling on deaf ears.”

Independent TD Denis Naughten said the reason for the clusters in meat plans was because of the “inordinate delays in providing results through the contact tracing system”.

He said that in one case a family waited seven weeks for results and TDs were being fed “organic manure” when they tried to get answers about test turnaround times.

Hitting out at claims by the HSE of a swift turnaround in testing he said that if it was so good why were meat plants “not closed by public health officials until the Covid screening results came back”.

He also said test results were going to employers before those who had been tested, an issue Ceann Comhairle Sean O Fearghail said “would be fundamental concern to the public and needs to be addressed”.

Minister for Health Simon Harris said he had asked Mr Naughten to provide details of these incidents.

“Workers, by its very nature in the meat industry, work in close proximity to each other; you have got industrial air cooling systems; you have got bottle necks in canteens and toilet facilities,” the Siptu official said.

“We have been calling for mandatory temperature testing for a number of weeks at this stage and I would call on the Minister to put in a sector specific strategy to deal with the meat industry to ensure that we protect our members, their families and the wider community.”