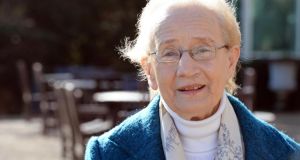 The former Supreme Court judge Ms Justice Catherine McGuinness: “The real priority is today’s children and their rights. Just as we sit in judgment on our forebears it is certain that we too will be judged on our response to today’s children.”

Former Supreme Court judge Catherine McGuinness has called on the Government to ensure funding for the inquiry into mother and baby homes is “not taken from the children who are alive and with us today”.

Ms Justice McGuinness said “the real priority is today’s children and their rights. Just as we sit in judgment on our forebears it is certain that we too will be judged on our response to today’s children”. Ms Justice McGuinness is chairwoman of the external assessment panel for the Children’s Rights Alliance’s report card, an annual survey of the extent to which policy promises concerning children have been fulfilled.

In an address to the Seanad, the former senator mentioned State successes with children but also a litany of failures including the treatment of migrant children in direct provision and Traveller children. On the proposed inquiry, she said if resources were needed, “let us be quite certain that those resources are not taken from the children who are alive and with us today, for example from the resources of the Department of Children or Tusla, the Child and Family Agency”. She called on the Coalition to “think carefully about what are its real priorities in the terms of reference”.

Criticising the response to public crises, she said that after the attempts to find a scapegoat, “instant action” was taken in the form of inquiries, but by the time they make their recommendations “the will to change has considerably dissipated” and the inquiry consumes considerable resources. She said a recent study of investigations concerning children from the Kilkenny incest inquiry onwards “demonstrated how few of the recommendations over the years have been fully put into effect”.

The alliance report card gave the Government an E grade for Traveller children, 17.7 per cent of whom leave school with no formal education compared to 1.4 per cent in the general population. “Access to education is vital for this group of children, yet in budget 2011 virtually all of the teacher supports for Travellers were simply abolished,” she said.

The Government received an F grade for migrant children. The State’s failure in this was highlighted last year when the Northern Ireland High Court refused to return a Sudanese refugee family to the jurisdiction “because such a return would be contrary to the best interests of the children”. Ms Justice McGuinness said: “We need to realise what a disgrace to us all this decision implies.”