Labour has launched a petition calling for a Citizens' Assembly on religious control of education. 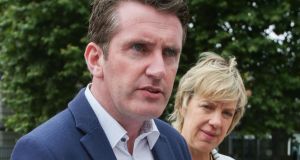 The Citizen’s Assembly should be recalled to consider a constitutional referendum to end religious control of schools, according to the Labour Party.

Labour senator Aodhán Ó Ríordáin began a petition to support this approach on Tuesday, saying a referendum could “end the influence of religion over education in Ireland.”

“We don’t believe that children should be separated on the basis of religion in education,” Mr Ó Ríordáin said, adding it was time to “break the link between religion and education in Ireland”.

After the same-sex marriage and abortion referendums, Mr O Riordain said the “next major constitutional question to be asked of the Irish people relates to Church control over Irish education.”

He said the State in the past had been trying to protect the rights of minority religions, “but that time is past.”

“What we want is for religion to be a private matter,” Mr Ó Ríordáin said.

Asked if religion should be taught at all in schools, Mr Ó Ríordáin said: “I don’t necessarily believe it’s a priority for the education system.

“The education system should be about having children together from all different backgrounds and if religion is important to parents or to a community, it can certainly be done outside of school time or perhaps at the weekend, or the churches themselves could step up to the plate.”

However, at a press event announcing the petition, Mr Ó Ríordáin’s colleagues Ged Nash and Ivana Bacik, intervened to say it should be possible to teach about different religions in schools, but that instruction in particular religions should be stopped in State-funded schools.

Mr Nash said children could be taught about the importance of religion in the formation of society. “What we’re talking about is not to have a single emphasis on a particular religion and faith based education, or religious instruction - that’s the difference,” he said.

“It is important young people should have an understanding of religious traditions,” he added. “The same could be said about introducing philosophy in schools.”

Ms Bacik said her children were in a multi-denominational school and were “taught broadly about different religions and different faiths and different traditions through a general religious education programme but what they don’t have is religious instruction.”

“We have a disproportionate influence of religious bodies over education in Ireland. Over 90 per cent of primary schools are under religious control. It’s not reflective of the modern Ireland. And the only way we can deal with this effectively is to have a constitutional referendum to deal with the issue,” Mr Ó Ríordáin said.

He said the referendum could take place next year if there was the political will by the Government.

He said as a teacher and headmaster in the past he had pledged to uphold the Catholic ethos of the schools in which he taught. “If you join the army, you wear the boots,” he said.