North Antrim: Win for Jim Allister but TUV attacked from both sides 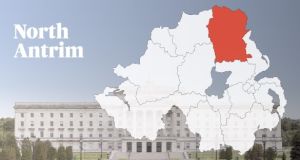 The DUP sang the British national anthem at the end of the count and North Antrim MP Ian Paisley (Jnr) came on stage to take a selfie with his successful party colleagues.

Traditional Unionist Voice leader Jim Allister came under fierce attack from the DUP and Sinn Féin in North Antrim amid claims his party is now “history”.

Despite increasing their vote in Mr Allister’s home constituency of North Antrim and getting him into Stormont, the party failed to elect another MLA in Northern Ireland which led to Mervyn Storey of the DUP to say the TUV was a failure.

He said Mr Allister himself had said beforehand he would deem it as such if he did not get a colleague into the Assembly with him.

Sinn Féin’s Daithi McKay agreed with Mr Storey: “The TUV project has failed. People want to move on. The TUV is history, it is confirmed here today. I think that is a good thing and I welcome the atmosphere at this count. Relations have not always been good in the past in election counts in North Antrim.”

However, a defiant Mr Allister said: “I look forward to continuing being the thorn in the flesh of Sinn Féin/DUP misrule and continuing to battle for what is right because right is still right and wrong is still wrong.”

He accepted his party results were disappointing across Northern Ireland, but was buoyed by an eight per cent rise in the vote for the TUV in North Antrim.

And he had said his party was on the march in North Antrim, despite claims they were “finished”.

“I am disappointed, I don’t conceal that. I was hoping that our message might have resonated better. It was in a difficult context. There was a deceptive campaign being run by the DUP about keeping out Sinn Féin, without ever completing the sentence,” said Mr Allister.

Meanwhile, with an economic timebomb ticking in Ballymena – which is set to lose over 1,500 jobs with the closure of the JTI Gallaher cigarette factory and the Michelin tyre plant in the next few years – that issue is to the forefront of the minds of the elected representatives.

Mr Logan (26) is from Ahoghill where his family are funeral undertakers, but he works with a retailer in Ballymena and says he is acutely conscious of the battle to make sure Ballymena survives the impending jobs doom. “There are some parties that want to talk about the last five years, but I want to talk about the next five - jobs and investment. That will be my focus, but I believe our best days are still ahead.

“As a Christian, I see politics as a mechanism for helping people. We have a duty as Christians to look after and protect our people and to be a voice for people. That is why I got in to politics.”

Former finance minister Mr Storey agreed the priority has to be about jobs and said they were disappointed with the job losses and said he has been speaking with Invest NI.

It wouldn’t be North Antrim if there wasn’t a mixture of religion and flags in abundance which was especially evident when the former DUP party leader, the late Dr Ian Paisley, held sway in the old days.

Like in the Dr Paisley times, the DUP broke into singing the Doxology when the final results were announced in Ballymena on Saturday morning and when elected Mr Storey said he “wished to give thanks to Almighty God”.

Former DUP councillor now TUV man, Roy Gillespie, waved a Union Flag on Saturday which had also been given an outing the night before when Mr Allister was elected when Mr Gillespie had cried out: “Praise the Lord”.

Before he left the stage on Saturday, Mr Allister shook hands with all the other elected candidates, but snubbed Sinn Féin’s Mr McKay.

However, all the other unionists did shake Mr McKay’s hand.

Ireland on alert as suspected case of coronavirus treated in Belfast 02:19
Council ‘held to ransom’ by Government over €182m payment 02:00
Call for improved rent collection as 61% of Dublin council tenants in arrears 02:00
‘Serious’ child abuse allegations repeatedly not investigated 01:00
Facebook ‘looking into’ link between Irish website and firm that breached privacy laws 00:01
SUBSCRIBER ONLY