Thousands walked from Dublin's O'Connell street to Government offices on Kildare Street in silence as a mark of solidarity with the French. 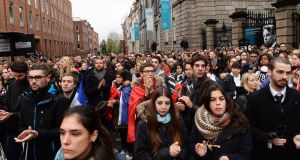 Some of the 3,500 to 4,000 people who marched from the Spire in Dublin to the Dail in solidarity for tjose who died in the terrorist attacks in Paris. Photograph: Cyril Byrne

Taoiseach Enda Kenny has said Ireland is at a normal level of warning following the Paris attacks, adding there is no evidence of anything “untoward” being planned either in or for Ireland.

However, he said there is a “very sophisticated response unit” should warnings or incidents arise. “We don’t have any information to suggest that but we are very conscious of being vigilant of all of this.

“In the case of Ireland, no more than any other European country, our national security committee has met. It shared information from the gardaí, from the Defence Forces, from (the Department of) Foreign Affairs, Department of Justice and so on,” Mr Kenny said.

“We have a Garda stationed permanently in the French embassy in Paris who attends these security meetings and liaises with the police forces around Europe and beyond.”

Mr Kenny said Europe stands with France and its people and said people must not be “beaten down by terrorist activity such as this”.

“This has been an appalling terrorist attack on humanity and on free citizens anywhere in the world. It is a very difficult kind of terrorist animal. If it is true, as they claim, to have been able to inflict this kind of mayhem in different countries in different areas in a very short time.”

Mr Kenny said there will inevitably be consequences for European leaders and how security measures will be arranged across the continent.

This must include the “sharing of information, of intelligence, so that, insofar as is possible, those responsible, or the organisation who are involved in this are dealt with and dealt with very clearly”.

“But for Paris and it citizens, one of the great cities of the world, to have a perfect evening destroyed and blown away literally by senseless terrorist activities and when you read the stories of those who were in the theatre, or those outside the stadium or in the restaurants.”

On the issue of reports that one of the attackers in Paris may held a Syrian passport and passed through Greece, Mr Kenny said there is a risk those seeking refuge in Europe from violence are themselves labelled terrorists.

“The very people that the humanitarian response is there to deal with are now being branded as being all terrorists by virtue of this kind of evidence,” the Taoiseach said, adding he was unsure if such reports are true.

Mr Kenny said a comprehensive and thorough analysis of security and the profile of refugees is needed but said it is open to countries “to refuse to take an individual if on the basis of security information there would be a suspicion”.

“The vast majority are perfectly law abiding citizens who wish to flee conflict with their families and their children.

“As one country, we have decided to respond in a humanitarian way to that. And obviously the vetting and the examinations will be very thorough and comprehensive.”

The Taoiseach has ordered flags to fly at half mast at State buildings, and said the minute’s silence across Europe tomorrow will be observed in Ireland.

The State will also be represented at commemoration events and the Dáil will make the tragedy this week, Mr Kenny said.