Cliff Taylor: Brexit is about to get real – and it won’t be pretty 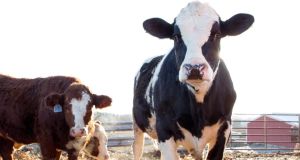 What deal will the EU and UK come to regarding the 800 million litres of milk the Republic annually imports from the North – and all the beef we export to Britain? Photograph: Kevin Miyazaki/The New York Times

Brexit is about to get real. There has been a strange lull since last June’s referendum, with the British economy holding up better than expected and little immediate impact on confidence. It has been almost as if the discussion on how Brexit would happen was taking place in a parallel universe, with “ normal” economic life continuing regardless.

The imminent triggering of article 50 and the launch of formal talks will surely start to bring home the reality of what Brexit might actually mean. To be clear, we do not yet know the answer and won’t for some time. But all the indications point towards a harder Brexit, one where Britain leaves the EU single market and customs union, and even possibly one where it crashes out without an agreement on the rules that will govern future trade between Britain and the EU.

For Ireland, the harder the Brexit, the more problematic. The likely implications for Ireland are also starting to be teased out, but one is already increasingly clear: Brexit will deepen the divide between Dublin and the rest of the country.

There is no doubt that Brexit will be a negative for Ireland, and probably for all regions of the country, even if Government ministers talking on the subject seem to think it will all be fine. The positive news – an inflow of foreign banks and financiers – will be a large part of the story for Dublin, raising questions about the availability of office space, housing and the other key infrastructure to deal with an expanding population.

On the flip side, many of the companies and groups most exposed to Brexit – those relying on the food sector, farming and smaller level manufacturing – are in more rural parts of Ireland. Here the talk will not be of overcrowding but of threats to jobs and livelihoods. And, of course, the Border region faces particular threats, with the likelihood of some kind of Border checks disrupting daily life and the free movement of goods.

As luck, or rather misfortune, would have it, the Border regions also have a high level of reliance on the industrial sectors most exposed to Brexit, both due to trade barrier threats and the risk of sterling weakness.

We are still looking through a fog here. The UK and the EU could agree new arrangements post-Brexit that would avoid the worst of the threats to trade, if not the question of the return of the Border. Economic self-interest suggests this should happen, and that the EU and UK should negotiate a deal allowing relatively free trade to continue. But this is now about politics and who is seen to “win” and “lose.” There is the real prospect of barriers to trade such as customs checks and tariffs.

Let’s hope it doesn’t come to that. But there is still a lot of Brexit denial about, at least in what Ministers are saying publicly. For example, the Taoiseach talks about a “seamless” Border. True, technology could help to undertake the checks on lorry traffic previously done by hand. But unless Britain reverses course and stays in the customs union a Border will return – and it is hard to see it being “seamless”. And unless a transitional deal is done that smooths Britain’s exit by agreeing what will happen before a formal deal is finalised, we will face this Border issue some time in the first half of 2019.

Against this backdrop, our Government is still hopelessly addicted to the positive spin on Brexit . Much of the talk is of how many new banks can be attracted to Dublin. Meanwhile, the risks are played down – and where is the talk about the future of the food sector or the hit to exposed regions? It is part of the old story: Ministers jump on announcements of shiny new projects arriving in Ireland but shy away from the less glamorous donkey work of creating conditions to help the indigenous sector.

In particular, a major national effort is now needed to consider what this means for the food sector and farming, and then to act on it. To take some random examples, cheddar cheese exports to the UK could be decimated and beef exports severely hit.And what about the 800 million litres of milk we annually import from the North for fresh milk sales and processing?

As the talks get under way, the risks for Ireland are twofold. First, they could all descend into a massive row, leading to no new trade deal and the hardest of Brexits. The initial test will be doing a deal on the terms on which Britain will exit. The EU has suggested it could cost Britons up to €60 billion to buy itself out of existing commitments. In response, Britain argues that, legally, it may not owe anything.

Even if this hurdle is jumped, Irish interests could be sidelined in the push and shove between prime minister Theresa May’s unrealistic estimate of the UK’s negotiating strength and the desire of some big EU members to penalise Britain. Irish interests would not be best served in such a conflict.

You would have to think that the battle lines will start to clarify themselves in the weeks ahead. Is the hardening of positions s just position taking, or is it more fundamental? Once article 50 is triggered, this will all start to get real – and quickly.

1 DUP pleads with UK to reduce salary threshold for migrant workers coming to North
2 A Russian cruiser with ‘cannibal rats’: What other ‘ghost ships’ could be out there?
3 Jewish council dismayed at Sinn Féin TD’s ‘unacceptable’ tweets
4 Fine Gael should swallow its pretend humility
5 I’m worried about my neighbour’s new ‘shed’ and what he intends to use it for
Real news has value SUBSCRIBE