Newry and Armagh: Danny Kennedy’s loss a shock for UUP

Sinn Féin’s Conor Murphy elected on third round, leaving Kennedy out in the cold 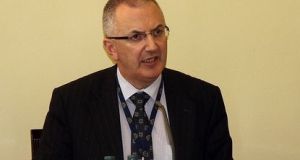 Danny Kennedy: “When you are beaten you have to recognise it – it can’t be anyone else’s fault”

A Sinn Féin “tide” in Newry and Armagh has delivered a shock result for former Ulster Unionist minister Danny Kennedy, who has lost his seat as an MLA after nearly 20 years. The former deputy party leader said it was unlikely that he would remain in politics following the defeat.

Sinn Féin’s former regional development minister Conor Murphy was deemed elected in the third round without reaching the quota, leaving Mr Kennedy out in the cold.

Afterwards he said he thought it was unlikely that he would remain in politics given his age and his years of service. “I had indicated through the course of the campaign that it was possible if Sinn Féin had a tide of support, one of the unionist seats would be lost. Sometimes when the tide comes in like that, you are washed away.

“The reduction in seats favoured the big parties, and they were able to convince people of their message. When you are beaten you have to recognise it – it can’t be anyone else’s fault. I’ve had the opportunity to serve as a minister in two consecutive executives and that is something I will treasure.”

Sinn Féin’s Mr Boylan said voting for his party in Newry and Armagh was very disciplined. “The message from Sinn Féin about equality, respect and integrity has come out for us, and that is the message we were giving out on the doorsteps. This is a mandate to renegotiate.” – PA