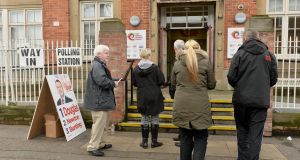 Voting in Northern Ireland: Beyond the frustrations of the North’s younger generation about the status quo is a desire for the Assembly to focus on issues that affect nationalist and unionist communities equally. Photograph: Presseye/Stephen Hamilton

Late into the night at a house party in Belfast, a drunken young man stood up and declared that he hated Catholics. When Emma Cummins alone asked why, the room of predominantly Protestant people went silent.

It was, she says, seen as a stupid question. Later, Cummins, like so many of her generation and the ones that came before her, went to university in Britain.

Today, Cummins (30) is one of the thousands of Northern Ireland-born young people now living across Britain, who are looking with a mixture of frustration and hope as counting of votes cast in the Assembly elections begins.

In Cummins’s case, she went to study in Newcastle, where she found that political debate did not need to descend into confrontation: “One thing that I found when growing up was that politics was a bit of a dirty word.

“In some ways it was not something I felt comfortable debating openly and when I moved to Newcastle, one of the first things I noticed was you could have a Conservative voter and a Labour voter in the room, debating at a house party or in the pub and that was a really good thing, that open debate,” says Cummins, who works as a writer in London.

“It could be that they really disagreed with each other quite intensely but it was not frightening . . . it was healthy. Political debate seemed healthier and safer. [In Northern Ireland] particularly as a young person, if you question [someone for] their political views and they are so caught up with their religion or their community or terrible things which have happened to their family members or their close friends, it can be very fiery.”

A recent survey from the Electoral Reform Society serves to illustrate the tribal separations that exist: just 4 per cent of Catholics would give their first vote to one of the unionist parties and 2 per cent of Protestants would support a nationalist politician first.

Paul Wyatt, a 22-year-old who moved to London last September to work in public relations, hosted a political radio show when he was studying at Queens University. Once in London, his enthusiasm waned.

“I used to be so keen on Northern Irish politics, every day I watched every single political programme. Then you move to London and you realise that people deal in politics here with real interests, real issues – interesting issues – that have a bit of importance. It is not that politics back home is not important, it is still important but everything always comes back to the constitutional issue, it is just so boring,” he says.

“If I tune into politics here in London, the debate will move on and change month to month whereas in Northern Ireland, it is literally always going to be the same about the constitutional issue.”

Ryan Wilson (33), a former teacher from Lisburn who is now studying to be a journalist, said that the flags protest five years ago, where loyalists rallied against the limited display of the union flag at Belfast City Hall, was indicative of the “parochial and so inconsequential and borderline embarrassing” arguments happening in Stormont.

Beyond the frustrations about the status quo is a desire for the legislature to focus on issues that affect both communities equally. Sarah Denny (25), who works in the pharmaceutical industry, is preparing to move back to Northern Ireland next month and is looking to the future when she will have a family.

“I think they need to more accepting of other people and other people’s views and ideas. I get the impression that it is very much two sides and one side won’t support the other side no matter if they had a brilliant idea or a brilliant reform - they just would not vote for it because of the principle of who came up with it,” she said. From a Catholic background, she has voted for the DUP in the past because of the positive work done in her local area in Holywood.

“I think they [politicians] need to realise that it is not just two communities, there are other people in Northern Ireland as well.

“I would like to see people my age getting involved and voting for new up-and-coming politicians. The past is still very important but I think also that we need to come up with new politicians and new representatives that have the people of Northern Ireland at the forefront and think of one community instead of [it] split into two.”

The scandal surrounding the botched Renewable Heat Incentive (RHI) programme which sparked the election was seen initially as a – perversely – welcome sign that politics was not focused just on sectarian issues, says Wilson.

“My initial reaction was that, ‘Isn’t it nice that they are arguing about something which is not sectarian’ – a normal crisis, if you like. Having thought about it more, I think it is a sectarian thing in a different guise. I think the DUP were stupid to get involved in it and I think Sinn Féin has exploited it and are therefore equally to blame and I continue to think therefore, a plague on both their houses.”

Andrew Williamson (34), a lawyer from Coleraine who now lives in Cambridge, says the political system needs to develop from one based on community lines to one defined by the traditional right and left.

“You have to remember that North and South the political system is still in its relative infancy being less than 100 years old but they still have not been able to offer the electorate a choice between right and left and it is still the choice between what badge and what colour,” he says.

The replacement of Martin McGuinness with Michelle O’Neill as Sinn Féin leader in the North has created some hope that the direct link between violence and republican politics has been broken, even if her father was jailed for IRA offences.

Her elevation, says Andrew Cummings (31), a doctor living in London from Portstewar, Co Derry, is a healthy change: “I think this election is key because it represents a move away from individuals who were directly associated with perpetrating acts of violence,” he adds.

Ending tribalism however is frustrated by a school system divided along religious lines, he says. “Unfortunately we still have this school system where we have very little integrated education and I think that is the main perpetrator for the continuation of tribalism in Northern Ireland. From age 11 you grow up around people who play certain sports who behave in a certain way. We are not doing enough to try and integrate education.”

Paul Campbell, a journalist also from Portstewart, says his home town is “one of the most pleasant, decent, mixed and happy places in the country” and is also one of the most integrated. But there are still two schools, largely divided on religious lines.

“Things have improved over the last 20 years – my niece does Irish dancing now and that is not unusual, whereas it might have been two decade ago – but I’d like to see more integrated education. But people wouldn’t be so suspicious if they were more familiar with each other and knew that, really, they’re very similar and have many of the same concerns and desires for the country,” he says.

“Some people grow up not knowing much about the other side of the community and that lack of understanding can breed fear and suspicion. The media often doesn’t help in this regard either – as they tend to bring the two sides together to have an argument. And, of course, the two main parties don’t help either as it is in their interests to drum up mutual suspicion as it secures them votes from people who might otherwise support the UUP or the SDLP or Alliance.”

Without a sitting administration, there remains the prospect that the concerns of Northern Irish people will be lost in the ongoing Brexit debate, which also threatens the possibility of the return of a hard Border between North and South.

Andrew Williamson is frustrated that there is no representation at a time when it is needed most. “What I am dismayed about is that with Brexit, Northern Ireland needs a voice like it never has before. At the very moment of need they just abandoned it all over what seems to be a pretty small squabble when you look at the whole picture,” he says.