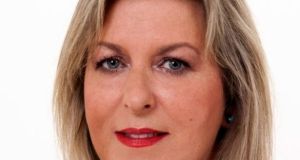 A newly-elected Sinn Féin TD, Réada Cronin, has apologised for comments she made on social media after media reports highlighted a series of controversial tweets from the Kildare North TD.

The tweets included numerous remarks that were critical of Israel.

Taoiseach Leo Varadkar described Ms Cronin’s comments as both anti-Semitic and anti-science. “This is not the kind of change we need,” he tweeted on Wednesday.

They included a claim that European wars were instigated and funded by banks and the retweeting of a message that Hitler was a pawn for a bank owned by the Rothschild family.

Last November, Ms Cronin replied to an anonymous Twitter account which suggested “loads of judges are paedophiles” by saying: “Wouldn’t surprise me.”

She has also criticised the fluoridation of drinking water in Ireland as “poisoning our water”.

Earlier this week, the Sunday Times highlighted how Ms Cronin accused the Israeli secret service, Mossad, of “sinister” interference in the UK general election to ensure the defeat of Labour leader, Jeremy Corbyn, which she subsequently described as “throwaway remarks”.

The anti-Semitic & anti-science remarks of one of Sinn Fein’s new TDs should trouble us all. This is not the kind of change we need #themaskslipsagain #notanormalparty

Ms Cronin, who was a Sinn Féin councillor between 2014 and 2019 before losing her seat on Kildare County Council in last year’s local elections, said she took the decision to block access to her account because of abuse directed at her following further publicity about her past tweets.

“I received a lot of abusive comments from Israel, the US and UK and some death threats,” Ms Cronin said.

In a statement, the TD said she “unreservedly and wholeheartedly” apologised to people she had offended because of “these glib, off-the-cuff tweets that I sent in the past”.

“I never intended to cause hurt or distress to anyone. I will assist and work with everybody, without qualification,” Ms Cronin said.

She added: “I abhor racism and bigotry of any shade. My character and my politics are Republican and egalitarian.”

The TD pointed out that most of the controversial tweets dated from before she joined Sinn Féin in 2013 and entered politics, while some recent ones between losing her council seat and being elected a TD were made as “a private citizen”.

On Tuesday night, Sinn Féin sought to distance itself from Ms Cronin’s comments claiming the tweets did not represent the views of the party.

A Sinn Féin spokesman said the party understood that Ms Cronin had apologised unreservedly for her remarks. “That is the right thing to do,” he added.

On Tuesday night, a spokeswoman for the Israeli embassy in Dublin described the language and ideas expressed by Ms Cronin as “shocking especially when coming from an elected TD”.

“They can only remind us of humanity’s darkest hours. It is not only Sinn Féin or the people of Ireland that should be deeply concerned but also any decent human being,” the spokeswoman said.

In other tweets seen by the Irish Times, Ms Cronin described Mr Varadkar in 2017 as “nothing more than a troll”, a “nonchalant shell” and “right-wing Tory boy”.

In January 2019 she claimed anyone who did not want a united Ireland was “traitorous”.

In her Facebook account which remains active, Ms Cronin was also critical during the recent General Election campaign about media coverage and claimed Fianna Fáil and Fine Gael were plotting with their “media luvvies” to rig the election.

In particular, she accused RTÉ of trying to rig the election for Fianna Fáil by the station’s original decision not to include the Sinn Féin president Mary Lou McDonald in the TV debate between Mr Varadkar and Mr Martin. Ms McDonald took part in the debate when it aired.

In 2018, Ms Cronin said Michael D Higgins as president had been “a huge disappointment.”