New Renua chief hopes to have candidates in place by Christmas

Offaly Council Councillor John Leahy to be paid € 65,000 from State funds for role 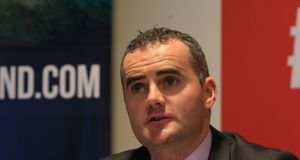 Renua leader John Leahy has said his party hopes to have local and general election candidates in place in some constituencies by Christmas following a countrywide tour.

He said he would be seeking support for the party in every constituency. “As regards candidates, it would be a question of who was suitable for the local or general election or both,’’ he added.

Mr Leahy said he hoped to “set out the party’s stall’’ in local radio and press interviews. “Our task now is to engage with people and build a support base and membership,’’ he added.

Mr Leahy, a member of Offaly County Council for the Ferbane electoral area, took up his new role on Monday. He will be paid €65,000 from the party’s State allocation of €250,000 annually. The rest of the money will be spent on party administration.

The party is entitled to the funding because its 26 candidates, none of whom was elected, managed to secure more than 2 per cent of the national vote in February’s general election.

Mr Leahy said the party’s national board would engage in policy formation and the possible opening of an office over the next few months.

“We will continue to represent the squeezed middle,’’ he added. “There are many people who have difficulty meeting their weekly commitments in terms of education, healthcare and other issues.’’

He said the party would place an emphasis on providing people with work and a fair taxation system. “Work has to be rewarded,’’ he added.

Mr Leahy said the party would develop “evidence-based policies’’, which would be carefully analysed before being published.

He said mistakes had been made in the party’s general election campaign. “There were too many sideshows and we failed to get our message across to the Irish people,’’ he added.

In the general election campaign, the party promised a flat tax, a tough law-and-order policy and it was associated with the anti-abortion campaign.

Following its disastrous performance, it received a series of blows which seemed to threaten its existence. Party leader Lucinda Creighton, who spearheaded its formation, stood down. Another former TD, Billy Timmins, also left, as did its president, financial commentator Eddie Hobbs and public relations officer and strategist John Drennan.

Mr Leahy always insisted, however, the party would not be wound up and he spoke with members over the summer about its future. He is one of the party’s four councillors.