Taoiseach got €900 iPhone because ‘no other suitable devices available’ 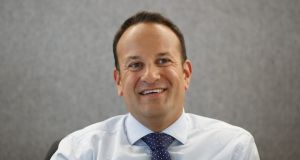 Taoiseach Leo Varadkar: “Staff and office holders are assigned equipment from stock as required to enable them carry out their official functions,” said his department. Photograph: Cole Burston/Bloomberg

A selection of new iPads, a €15 kettle and office paintings were among the items ordered by Government Ministers on their appointments earlier this year.

Taoiseach Leo Varadkar got a brand new iPhone with a protective cover, at a cost of €898.17, after taking office.

His department said: “Staff and office holders are assigned equipment from stock as required to enable them carry out their official functions.”

They said the purchase of Mr Varadkar’s iPhone was because there were “no suitable devices [available] at the time”.

Junior Minister John Paul Phelan at the Department of Housing looked for a kettle and two shredders for his new office in the Custom House. The kettle cost just €15 while the shredders – one each for his departmental office and another for Leinster House – set the taxpayer back €520.

Mr Phelan also looked for some paintings to decorate his offices, with some rather specific requests. An email said: “Sketches or drawings of WT Cosgrave, Paddy McGilligan, former minister for finance and attorney general, and Michael Sweetman. [and/or] landscapes or OPW sites in Kilkenny [his home constituency].”

In response, he was asked: “Has the Minister any particular preference? Portrait? Still Life? Modern? Landscape? Choices may be limited as 92 per cent of the OPW-managed State Art Collection is already on display.”

Minister for Housing Eoghan Murphy’s request list from his personal assistant included four computer suites, a TV with access to coverage of Leinster House, a “heavy duty” colour printer and scanner, and somewhere to put around 20 boxes the Minister wanted to store.

At the Department of Social Protection, the only purchases that took place were two chairs on behalf of Minister for Employment Affairs Regina Doherty and a staff member.

The department said: “Two chairs were purchased for the Minister. One special back chair costing €350.55 and one ordinary staff chair at €182.04. Therefore, the total sum involved was €532.59.”

Minister for Foreign Affairs Simon Coveney got a new iPhone and iPad along with cases, screen protectors and a power pack. Altogether, the items cost €1,965 and the department said they were the only purchases made after the new Government was appointed.

At the Department of Communications, an iPad for the Minister, Denis Naughten, was bought at a bargain-basement rate. The 32GB silver tablet cost €323 after a 5 per cent Government discount was applied.