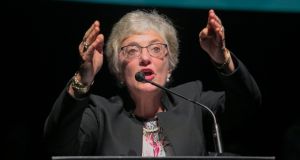 Minister for Children and Youth Affairs Katherine Zappone: “The people will not be in favour of a liberalisation of the abortion legislation to the extent that the Citizens’ Assembly put forward.” Photograph: Gareth Chaney Collins

Minister for Children Katherine Zappone has said she believes the public would not support a referendum proposing the extensive liberalisation of Ireland’s abortion laws recommended by the Citizens’ Assembly.

Her comments come as the Coalition to Repeal the Eighth Amendment said it would oppose any “watering down” of the assembly recommendations, including the recommendation of 64 per cent of its members that termination of pregnancy without restriction should be lawful.

“I expect that the people will not be in favour of a liberalisation of the abortion legislation to the extent that the Citizens’ Assembly put forward,” Ms Zappone told The Irish Times.

The Oireachtas committee examining the eighth amendment has a Christmas deadline to consider the recommendations of the assembly and to report back to the Government with a proposed referendum wording. The referendum is due to take place in May or June next year.

Meanwhile, draft legislative scenarios are being worked on by officials in the office of Minister for Health Simon Harris and the Attorney General’s office. This work is being done now so a referendum Bill can be initiated next February.

Ms Zappone, the Independent Minister who is the strongest voice at Cabinet in favour of removing the eighth amendment from the Constitution, said she thought Taoiseach Leo Varadkar had not yet fully formulated his views on the issue.

“From what he has said it appears he hasn’t come to his own decisions or his own views on that, and that’s okay,” she said.

In advance of the referendum, Ms Zappone said her priority would be to find ways to “encourage and support conversations to understand what is the reality of women’s experience in relation to their terminations”. She said she would be focusing on “information, education and conversations”.

Ms Zappone said she was “deeply concerned” about venues withdrawing permission for anti-abortion and pro-choice group meetings because of pressure from rival organisations. She said it was vital people on all sides of the debate had an opportunity to gather in hotels and community centres to talk about the referendum on the eighth amendment.

“I am deeply concerned to start reading about the fact that there may be less and less public places where citizens can gather to discuss matters. We have to find a way to challenge that,” she said.

Three Dublin hotels have cancelled anti-abortion events this week following complaints from pro-choice activists, according to the organising groups. Pro-choice campaigners have also complained that a number of other venues have withdrawn permission for events to be held on their premises.

Organisers of Saturday’s “March for Choice” in Dublin calling for the repeal of the eighth amendment say they are expecting more than 30,000 to attend. The march starts at the Garden of Remembrance in Parnell Street at 1.30pm.

Linda Kavanagh of the Abortion Rights Campaign said they are expecting a far bigger turnout than in previous years, given the referendum next year.

Mr Varadkar confirmed the referendum timescale in the Dáil this week. He has indicated he does not believe proposals for a wide-ranging liberalisation of the law, based on the recommendations of the assembly, would be passed in a referendum.

While he has said the eighth amendment should be replaced with something else because it was too restrictive, he does not personally favour a complete liberalisation of the law.

‘Men like Seamus Mallon don’t come along too often’ 02:05
Men ‘delighted’ to be invited to Citizens’ Assembly on gender equality 01:00
Government must ‘come clean’ on children’s hospital delays and costs 01:00
Bodies of three young children found in house in Dublin 00:30
Seamus Mallon: Tributes paid from across political spectrum 22:12
SUBSCRIBER ONLY