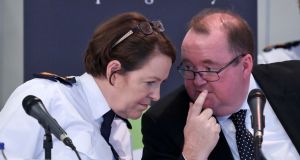 Gardaí failed to provide a report to the Policing Authority on a private email account used by former Garda commissioner Nóirín O’Sullivan.

The Irish Times has learned the Policing Authority requested a report “in relation to the email issue mentioned, including some sense of the volumes of traffic on official devices, the scale of usage, content risk and how assurance on mitigation of this risk is provided”.

This request was made at a meeting in December 2016, a month after it emerged Ms O’Sullivan had used a commercial email service to send official Garda correspondence.

A similar request to An Garda Síochána was made by the former minister for justice, Frances Fitzgerald.

Speaking at the Oireachtas committee on justice yesterday, the Garda’s chief administrative officer, Joe Nugent, confirmed he had examined the former commissioner’s personal email account. However, he did not identify any “sensitive emails” relating to her role as commissioner, Mr Nugent said.

He said he had not completed a report and therefore did not give it to the Policing Authority or the Department of Justice. He reported verbally, he said.

Mr Nugent and Deputy Garda Commissioner John Twomey confirmed they had shared emails but said it was not related to Garda business. The correspondence was related to newspaper articles, the two witnesses said.

The committee heard new policies have been put in place for all gardaí regarding the use of personal email accounts for official emails.

Mr Kelly said Mr Nugent should formulate a report and send it to Mr Justice Peter Charleton, who is chairing the Disclosures Tribunal, and the Policing Authority.

Meanwhile, it has emerged the private email accounts of Ms Fitzgerald were not part of a trawl conducted by the Department of Justice.

Taoiseach Leo Varadkar ordered an examination of all departmental documents related to Sgt Maurice McCabe after it emerged correspondence was not sent directly to Mr Charleton’s inquiry. Two further pieces of correspondence were found and have been sent to the tribunal.

It is understood seven email accounts were checked, but these did not include those of Ms Fitzgerald or her special advisers.

Mr Twomey declined to be drawn on any matters related to the Charleton tribunal when he appeared before the Oireachtas justice committee.

Mr Twomey said he written to the committee to advise them he could not say anything that would put at risk the ongoing work of the tribunal.

“At all times, our aim is to assist in establishing the facts and truth relating to all matters before the tribunal. In that regard, we have furnished the tribunal with tens of thousands of pages of material and we will continue to provide the tribunal with all assistance it requires.”