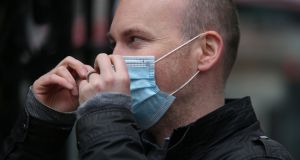 Paul Murphy: he said he believed Mr Justice Woulfe “undermined the public health effort to stop the spread of infection” in attending the dinner in Clifden in August, and in his response to the controversy over the matter. Photograph: Nick Bradshaw

A motion seeking to impeach Supreme Court judge Séamus Woulfe is to be moved in the Dáil this week by Rise TD Paul Murphy with the support of Solidarity People Before Profit’s Bríd Smith.

“This is a question of accountability,” Mr Murphy said when he announced the move on Twitter.

“Through his attendance at the ‘golfgate’ dinner and his subsequent behaviour Séamus Woulfe substantially undermined the public health effort,” Mr Murphy added.

Any TD can lodge a motion for impeachment under article 35.4 of the Constitution, and it must be dealt with immediately. In the process one speech is likely to be made to the House, and it will be put to a vote and if it is rejected that is the end of the process.

Political sources say there is little prospect of the motion being passed by the Dáil as there is little appetite for a protracted process of judicial impeachment which could tie the Oireachtas up for months.

Many TDs say that while they think Mr Justice Woulfe should have resigned they do not believe that his behaviour is sufficiently serious to warrant his removal – a process never brought to a conclusion in the history of the State.

Mr Murphy and Ms Smith will say that Mr Justice Woulfe has reached the requirement under the Constitution for “stated misbehaviour” and impeachment proceedings should therefore begin.

Mr Murphy, who represents Dublin South West TD, said he intended to move the motion on Wednesday or Thursday.

He said he believed that Mr Justice Woulfe “undermined the public health effort to stop the spread of infection” in attending the dinner in Clifden, Co Galway, in August, and in his response to the controversy over the matter.

Some 80 people gathered for a meal spread between two rooms at a time when public health restrictions advised against groups of that size meeting or dining together.

Taoiseach Micheál Martin confirmed in the Dáil last week that the Government intended to take no further steps against the judge.

He said the “constitutional protections of the judiciary is best achieved in this particular case by taking no further steps in this matter”, and that it was up to the Oireachtas “to take its own initiative on the matter if it so wishes”.

A Government spokeswoman said on Sunday that the Taoiseach had set out the Government’s position, and there was nothing further to add on the matter.

Meanwhile, informed sources say that none of Mr Justice Woulfe’s colleagues are contemplating resignation, and that he will take his place on the court in February.

Relations between Mr Justice Woulfe and his colleagues, however, are likely to remain strained following the exchanges since the Oireachtas golf dinner and the publication of the transcripts of his interview with Ms Justice Susan Denham and the correspondence between him and the Chief Justice Frank Clarke.

Sources say that the judges’ position is that the correspondence was not published to precipitate an impeachment but to refute some of the claims made by Woulfe.

The others judges are believed to be at pains to dispute Mr Justice’s Woulfe’s characterisation of their meeting with him which caused him to suffer from stress.