‘Who is the leader of Sinn Féin? Is it Mary Lou McDonald. Or is it the IRA?’ Breege Quinn asks 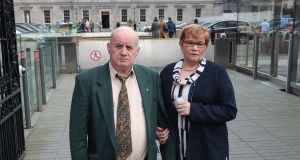 Breege Quinn, the mother of murder victim Paul Quinn, has strongly criticised Sinn Féin leader Mary Lou McDonald over the continuing refusal of her colleague Conor Murphy to unequivocally state that Mr Quinn was not a criminal.

Mrs Quinn and her husband Stephen Quinn visited Leinster House on Thursday to meet political parties and highlight the case of her late son, who was beaten to death by a gang of men with IRA connections in 2007.

Nobody has been convicted in relation to his murder.

Speaking to the media before a series of meetings with party representatives, Mrs Quinn said she was disappointed with Ms McDonald’s efforts to date in relation to a statement made by Mr Murphy abut her son around the time of his murder, in which he said it was well known he was involved in criminality. Mr Murphy also said he had spoken to the IRA which had denied any involvement in the killing.

Before the general election, Mr Murphy, an MLA for Co Armagh and minister for finance in the Northern Executive, said he “unreservedly” withdrew and apologised for his 2007 remarks. But Mrs Quinn said he did not go far enough. She wanted him to bluntly say he was not a criminal and to give information to the Garda and PSNI about IRA members he spoke to in 2007.

“We have asked Mary Lou to ask (Conor Murphy) to come out and say that Paul Quinn was not a criminal. She said that it was best that that would be down around the table,” said Mrs Quinn.

She said Mr Murphy had yet to withdraw what she described as his “slur” against her late son, adding: “Who is the leader of Sinn Féin? Is it Mary Lou McDonald. Or is it the IRA?

“Because it seems that Mary Lou has no say in getting Conor Murphy to give justice to the Quinn family.”

She instanced a recent Sinn Féin rally in Newry, attended by Ms McDonald, where someone from the local community told a room full of people that Mr Murphy had nothing to apologise for.

Mrs Quinn said: “Just last week at a rally we heard someone from our own community state to a room full of people that Conor Murphy had nothing to apologise for.

“This went unchallenged by Mary Lou McDonald and flied in the face of a phone call [to me] only a few weeks ago. She remained silent, and to say we are disappointed is an understatement.

“There are no words for the hurt and humiliation we feel to have heard those words applauded [at the meeting].

“And yet we are the ones being accused of making this political,” she said.

Mrs Quinn said they would not be meeting representatives from Sinn Féin but would meet all other political parties. She said the family would continue to campaign for justice for her son, and for Mr Murphy to apologise on national television for calling her son a criminal.

A Sinn Féin spokesman has said: “Conor Murphy has apologised for he remarks he made and has unreservedly withdrawn them.”