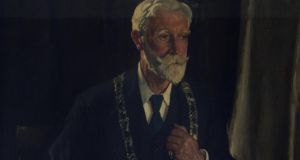 It was William Martin Murphy who emerged as the real victor of the revolutionary Ireland of 100 years ago. Not Patrick Pearse, James Connolly, James Larkin or even Michael Collins. For it was Murphy who defined the ethos of the new Ireland, not the others, although Michael Collins might have done his bit to consolidate the Murphy legacy had he lived.

As with many “capitalist ogres” there was an ordinariness and decency about the man. He was born on January 6th, 1845, in Castletownbere, Co Cork, son of a building contractor. He was educated by the Jesuits in Belvedere College, the alma mater of many another capitalist ogre.

He began his business career in Cork, “a sober young man, a practising Catholic with a social conscience” (according to his biographer, the Jesuit Thomas J Morrissey), and an active member of St Vincent de Paul Society. He married happily and well, which facilitated his business career as his father-in-law was well-connected. He moved to Dublin where he acquired a fine residence in Dartry. He became president of the Rathmines and Rathgar Musical Society, captain of Milltown Golf Club and a member of one of the fine yacht clubs of Kingstown (now Dún Laoghaire).

His interests stretched to Britain, Portugal and South America, but his main business centre remained Dublin. According to his biographer he was then a “rare phenomenon, a successful Irish Catholic businessman”. His interests included trams, department stores, hotels, and, crucially, Independent Newspapers.

He was elected to Westminster in 1885. He took the anti-Parnell side in the Irish Parliamentary Party split of the early 1890s and, as a consequence, lost his Westminster seat in 1892 to a mere victualler, William Field.

He was offered and refused a knighthood, defiant even in the presence of King Edward VII in Dublin in 1907.

He professed to be a just and paternal employer. He urged his fellow employers: “Apart from its justice, the policy of looking after the conditions of your labour, particularly low-paid labour, without waiting to be asked, will be found to pay from a business point of view.”

It was not unusual then or now to refer to human beings as “labour”.

Like many employers then he was dismayed by the rise of trade unions, notably the Irish Transport and General Workers Union (ITGWU), which had been established in 1909 and which organised unskilled workers. He saw no need for trade unions, no need for workers’ solidarity in the face of the negotiating and financial might of “capital”, since the Catholic munificence of employers would itself ensure the welfare of labour.

It was a time of “strike fever”, which caused consternation among employers. Murphy had founded the Dublin Employers Federation for “the mutual protection and indemnity of all employers of labour in Dublin, who join a federation and to promote freedom of contract between employers and employees”.

There was no acknowledgment there of the hopelessly unequal balance between the power of employers and the powerlessness and vulnerability of workers, particularly impoverished workers.

As usual, the employers had the media on their side. The Irish Times noted then: “We are getting into a position in which the fight between capital and labour will have to be fought out to the bitter end . . . The strikers must be taught they are not omnipotent.”

There was no running water in the tenements, aside from a single tap for 20 or so families. There were no more than two outside toilet facilities. Poverty was pervasive.

Murphy, in spite of his “social conscience” was determined to ensure that the class power of the impoverished would not be augmented by the presence of a radical trade union. He persuaded employers to dismiss workers who were members of the ITGWU or who refused to sign a pledge never to join that union. In furtherance of that he himself dismissed dispatch workers from the offices of the Irish Independent on August 15th, 1913, and there began the lockout.

The workers acknowledged defeat in early 1914. William Martin Murphy had won, not just then but thereafter. For the capitalist ethos he espoused became the ethos of the independent Irish state, for although trade union membership rose to over half the workforce in the early 1960s, it is now around one-third and unions are so feeble their negotiating power is negligible.

Murphy did not succeed on his own. He had a staunch ally in the Catholic Church and to that I hope to return.