Miriam Lord: Warm words for Billy Lawless in US Senate 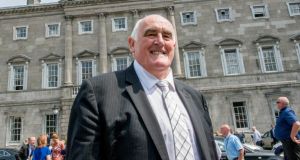 Senator Billy Lawless: due back in Chicago this week for a hip operation. Photograph: Brenda Fitzsimons

On Wednesday morning in Washington, DC, Dick Durbin had some interesting information to impart to his fellow senators.

“We all know the Senate of the United States is composed of two senators from each state,” began the Democratic party’s whip. “Well, today I have news. My home state of Illinois just picked up a third senator.”

Durbin explained: “Last month the Irish prime minister, or Taoiseach, Enda Kenny, announced eight appointees to the Irish senate. One of the appointees is my dear friend in Chicago, Billy Lawless. Billy is the first Irish citizen living in the United States to be appointed to the Irish Senate. This is truly historic.”

The senator’s remarks on Capitol Hill brought a touch of transatlantic symmetry to the day. Around the time he was congratulating Lawless on the floor of the senate chamber in the US, his name was being read into the record on the floor of the Seanad chamber here in Ireland.

Billy, who was on crutches and is due back in Chicago this week for a hip operation, didn’t speak on the opening day of the 25th Seanad. Like most of the newcomers, he let the returning Senators get on with talking about themselves in glowing terms.

Meanwhile, back on Capitol Hill, Mr Durbin was singing his praises. “No one has been a stronger voice and advocate for the Irish diaspora and immigration reform than Billy Lawless. Prime minister Kenny couldn’t have made a better choice.”

Lawless was a successful publican and hotelier in Galway before he left for the US at the age of 48. A former president of the Vintners’ Federation, he was chairman of Fine Gael’s Galway West branch in the early 1990s and ran unsuccessfully for the council.

Within six months of arriving in Chicago he opened his first pub/restaurant. Today, he has four of them and a fifth is about to open.

“Simply put, the Lawless family is restaurant royalty in Chicago. The family business started with 10 employees, now they have 300,” said Durbin.

“It was only two years ago that I came to the senate floor to congratulate Billy and his wife Ann on becoming citizens in the United States. They waited a long time and they worked hard for it and I was proud to call them not just my friends but my fellow Americans. Today, I am proud to call Billy Lawless my fellow senator.” Ireland and America are “united in friendship” with “long and proud histories forged in fires of rebellious spirit”.

But Durbin hasn’t always been so complimentary. Early last year, he said that if the US’s goal was to create a corporate tax rate “lower than any other country on Earth – like Ireland, then I am afraid we are going to find ourselves in an impossible situation, unable to raise the revenue that we need to sustain our government.”

Companies should accept the responsibility of living in the US with the benefits it produces, and pay their fair share of taxes. “If it is a race to the bottom on tax rates, it is not something that I want to be part of,” he declared.

Perhaps Billy, when he’s back on his feet, might have a word in Michael Noonan’s ear about Irish tax loopholes for American multinationals.

Although he might advise his fellow senator back in the States not to hold his breath waiting for an answer.

Isn’t it simply morrrrrtifying when you go to an event and somebody walks in wearing the same outfit?

Imagine how Minister for Public Expenditure Paschal Donohoe and Minister of State for Finance Eoghan Murphy must have felt on Wednesday at a media briefing to announce more funding for the Departments of Health and Justice.

As they stood on the steps of Government Buildings, Murphy took one look at his senior colleague and exclaimed in horror: “We’re wearing the same suit!”

For gentlemen who do not want to be mistaken for a politician, the suit is by James Herren.

Yesterday, we couldn’t help but notice a photograph of Paschal as he made another good news announcement.

This time, he was accompanied by Minister for Health Simon Harris for the turning of the sod on a new primary care centre in Dublin’s north inner city.

Both of them wore dark beige chinos, navy jackets and blue shirts.

Has Enda issued a uniform edict?

Donohoe, meanwhile, went off with the family for a few days in Donegal over the long weekend. They had a lovely time in Lough Eske, but Paschal arrived home traumatised.

When they were out having Sunday lunch he was mistaken by a diner for former Labour minister Alan Kelly.

McGrath does a Travolta over disability funding

The pace of life has been upped considerably for those TDs experiencing ministerial office for the first time.

Shane Ross looked rather tired during the week. But then, we hear that relations between Fine Gael and the Underpinning Alliance are not great. Fine Gael is a party while the Underpinners like to think of themselves as free spirits. So it’s all rather tense at Government level.

However, superjunior minister Finian McGrath was very pleased with himself on Thursday when he marched into the sunshine outside Leinster House to announce he had secured extra funding for disability services.

After he met the media, Finian strutted back up the plinth like John Travolta in the opening credits for Saturday Night Fever. All he was missing was a white suit.

Meanwhile, his colleague Lord Ross, aka Winston Churchtown, was saying nothing about how things are progressing (unusual in itself) with Fine Gael when we bumped into him this week.

He had just returned from his first European Union ministerial council meeting in Luxembourg and, for a Minister for Transport, his journey wasn’t the smoothest. This might have been because he made the arrangements himself.

He travelled on his own and nearly missed his connecting flight from Frankfurt to Luxembourg. He tried to impress upon an airport official the importance of his journey. But, Lord Ross said: “I didn’t tell him who I was.”

His words fell on deaf ears. “If you do not stop talking you will not be getting on the plane!” he was told.

When Winston finally arrived at his hotel, there was no booking in the system.

Then the Irish Embassy called to see how their visiting Minister was getting on and saved the day. They even laid on a driver to bring him from his meeting to the airport.

Minister Churchtown was most impressed, particularly with the driver, who sounded like an all-round good egg. A most agreeable chap from Malahide.

And it is a mark of the high calibre of our diplomatic corps that the driver never once thought to embarrass his Minister by telling him that he was, in fact, the Ambassador.

Winston is now gearing up for France and the football.

Luckily for him, his portfolio includes sport, so trips to see the boys in green play in the European Championships are a legitimate part of the job.

As it happens, Lord Ross is providing his own tickets.

He attends as many matches as he can and had already purchased tickets for himself and grandsons Tom (16) and Edward (8).

As for official duties? “If they require me on the day I’ll nip up and shake a few hands.”

There was a festive air about the Seanad on Wednesday when members of the Upper House met for the first time in the handsome old chamber. They’ll be turfed out of it soon enough when the urgent repair work begins to stop the room from falling down around their ears.

It was a happy affair, with newbies celebrating their first day with proud parents and family members. “This most felicitous day,” trilled Joe O’Reilly from Cavan, one of the lucky few Fine Gaelers who lost a Dáil seat and got a Seanad one. But there was some sadness too.

It was a bittersweet occasion for the Ardagh family. Catherine Ardagh, Fianna Fail’s Seanad leader and a first-time Senator, had the honour of nominating Denis O’Donovan for the position of cathaoirleach.

A number of members sympathised with her on the death last month of her father, former Fianna Fáil TD, Seán Ardagh, a man well liked and respected by all sides in Leinster House.

It was also a bittersweet day for new Green Party Senator Grace O’Sullivan. Her father, Johnny, who was so proud to see her elected, died three weeks ago.

On a happier note, there were lots of kind words for popular West Cork politician Denis O’Donovan, who was clearly deeply honoured to be elected Cathaoirleach.