Miriam Lord: ‘The quiet Yes kept its counsel. They spoke when it mattered’

Panti Bliss arrived at Dublin Castle to hundreds of jubiliant yes supporters. As a long time same-sex marriage campaigner she spoke about what today means for the LGBT community in Ireland. 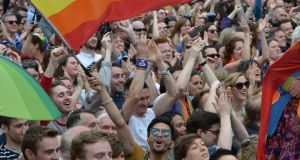 The crowd in the courtyard of Dublin Castle react as the result of the same-sex marriage referendum is announced. Photograph: Charles McQuillan/Getty Images

So here was that appalling vista blossoming before us. And you know what? The view was wonderful.

In the end, two-thirds of Irish voters found it an easy jump from live and let live to love and let love. The scenes in and around Dublin Castle on Saturday were irresistible. For those still feeling conflicted about voting Yes, they will have witnessed the unadorned joy of people whose world they changed for the better and known then that they did the right thing.

It was the true stories that did it and they were all there: the friends and lovers and loving families, gay, straight and everything in between. The sun shone. It felt like the happiest place on earth.

Senator Katherine Zappone proposed on live TV. “Today in this new Ireland, Ann Louise Gilligan, will you marry me?” As the crowd cheered, Ann Louise accepted with a kiss.

“I said yes to Katherine 12 years ago at our marriage in Canada. Now we are bringing the yes back home to Ireland, our country. “Yes. Yes. Yes!”

It was such a special day the crowd in the castle courtyard lost the run of itself entirely and began cheering politicians to the rafters. Drag queen Panti Bliss tottered across the cobbles to deafening acclaim.

Earlier in the afternoon, former president Mary McAleese told jubilant campaigners from Yes Equality that they had taken the people on an extraordinary journey. “You moved Ireland. You shifted the tectonic plates. You can feel them moving.”

In the morning at the RDS, as the boxes for Dublin city were opened, anxiety levels began to soar. Tallymen and -women took up their positions at the rails. The cross- party effort was augmented by volunteers from the Yes campaign. They were the ones whose hands were trembling as they marked Yes and No votes on tally sheets. But it didn’t take long to work out that the amendment would be carried. The only question was the size of the margin.

Kate Brady (26) from Booterstown watched the bundles piling up on the trestle table. A UN development aid worker, she came from Maputo in Mozambique to cast her vote.

“Many people put a lot of money into their weddings, so I thought I’d put my money into this. The way I saw it, if it doesn’t pass I’ll never forgive myself for not voting and if it does, I want to be here.”

The first politician to arrive was former Labour leader Eamon Gilmore. As the man most responsible for driving the referendum forward politically, he was given a hero’s welcome.

“Democracy is not a passive activity,” he said, praising young people in particular for mobilising on the issue.

Yet, as the results came in, it emerged that the nation voted across the generations and the urban-rural divide. There had been a lot of noise made about the silent No voters. But in reality, the quiet Yes had been keeping its counsel. They spoke out when it mattered.

Labour TD John Lyons, one of the handful of openly gay politicians in Leinster House, had to come up with a new word to describe how exhausted and exhilarated he felt. “I’m emotional-less at this stage,” he said. We’d hate to see him when he’s emotional.

There were cheers for those campaigners who worked for years to bring the moment about. In the media scrum around Gráinne Healy, Brian Sheehan and Moninne Griffith, a young male voice stuck a serious note: “Moninne’s hair looks faaabulous, though.”

The vote took place on the feast of St Rita, patron saint of impossible causes. She can mark this one down as a win.

The party was in full swing by midday. Staff using electronic clickers processed people in and out Dublin Castle’s gates. As the afternoon progressed, it suddenly became apparent why the world is experiencing a prosecco shortage. Hawkers wandered through the crowds on Dame Street shouting, “Rainbow hats, flags and headbands!” – the process of “normalisation” already well under way. Welcome to the new normal.

On the cobbles there were dogs and babies in rainbow-striped babygros, modest picnics and impromptu parties, banners, balloons, feather boas and bubbles. Miriam O’Callaghan (treated as royalty) was doing her thing on the stage. Miss Panti rocked up with a pink flower in one hand and a mojito in the other.

Senator David Norris sat for a breather in the press room next to Senator Jim Walsh, who had opposed civil partnership and same-sex marriage. They chatted. Every so often, Norris spotted somebody he recognised. “Coo-eee!” he waved, with a big bold face on him.

Brian O’Driscoll and Amy Huberman wandered around the crowd for a while, babies in tow. Unlike other celebrities, they didn’t seek out the media. The babies had the faces kissed off them.

Environment minister Alan Kelly was wearing a blue-and-gold tie given to him by a colleague in Fáilte Ireland.

Damian O’Brien from Clonakilty died in 2009. A gay man, his body was found in the Grand Canal. “He told me to wear this tie on a special occasion. I can think of no better time to wear it for him.”

Gerry Adams appeared on stage, interposing himself between Panti and Katherine Zappone as they were waving to the crowd. “He’s doing well,” joked a reveller, “meeting a prince and a queen in the one week.”

Frances Fitzgerald was in shocking pink. By the end of the evening, she had to take off her shoes because her feet were killing her.

The Fianna Fáil leader was speaking in riddles. “I’ve Spanish blood in me,” he told The Irish Times.”

“De Valera, like,” he said, his voice going all Cork. (It seems there is a Spanish connection in his family tree.)

And all the while on the big screen, the counties were, slowly, one by one, turning green. Except for Roscommon-South Leitrim, but that emigration county still managed to put up a sizeable Yes vote.

Back on the streets, we met Jack Stenson and Stefaan Verbruggen from Galway, who came home from London to vote. Both 27 now, they met at the university film club and became engaged on their eighth anniversary.

“I made a short movie of my proposal and hired out the cinema in London where we had our first date. Stefaan thought the film was going to be shite because there was nobody else there. We’re getting married next July on our 10th anniversary. The deposit is already paid.”

Can we see the engagement rings?

“We didn’t get any. We’re not into mengagement rings.”

And still the counties turned green. There was a huge roar when both Donegal constituencies declared. Finnian Curran rushed over and embraced his tearful dad. Donegal man Tom Curran, general secretary of Fine Gael, spoke movingly during the campaign about being a devout Catholic and “a proud, proud father to a gay son”.

Leo Varadkar walked in and was greeted like a movie star. He looked mortified and delighted. We feared the only way he might be able to leave the castle confines at the end of the evening would be in the back of a van with a blanket over him. Everyone was hugging.

“It’s like Italia ’90,” said former Fianna Fáil politician Pat Carey, who came out recently at the age of 67

It was coming close to the declaration. Inevitably, the crowd started to sing. “All you need is love . . .” But there was no sign of three Cork constituencies turning green, so they changed the words and sang, “All we need is Cork . . .”

Norris appeared at the front of the stage “Speech!” cried the crowd. He duly obliged. For a man of his age, he has a great set of lungs. Ireland “a small, independent republic,” he said, was sending a message to the world. “Liberté, égalité, fraternité,” he bellowed and the crowd went wild.

Finally, after the obligatory Fields of Athenry (in harmony), returning officer Ríona Ní Fhlanghaile appeared with a “Hello everybody”.

They all knew what was coming, but they watched the screen intently, hands up to mouths, willing her to say the words, to make it real and not some stupid dream. She did, and the place erupted in a blur of kissing and weeping. Babies were waved, along with arms and flags, wigs, prosecco, high hopes and a life-sized cut out of Mrs Brown.

And then, out of nowhere, the crowd began to sing the national anthem. Some held up handwritten signs: “Thank you.” They sang, heartfelt, right to the end, proud to be Irish, flying little tricolours next to their rainbows.

“Yesterday, we stood up and today we were counted,” said Gráinne Healy.

As the Taoiseach and Tánaiste held a final press conference, music from many parties drifted across the castle garden. Dame Street, George’s Street and Parliament Street en fete. Ireland’s people voted to stand up for their gay and lesbian equals so they can live in our shelter and no longer in our shadow, declared Enda.

Joan Burton echoed his words on “a magical, moving moment, when the world’s beating heart is in Ireland”.

Oh dear. We were warned. What have we done?