Miriam Lord: Taoiseach on Tour loses the run of himself 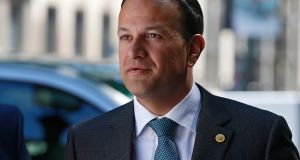 For all his media savvy, when meeting a group of media savvy young people, Taoiseach Leo Varadkar didn’t think his remarks would get out. File photograph: PA

Something serious had to be going down.

A harmless photo opportunity involving shovels and shirt-sleeves was there for the taking, but the Taoiseach cried off at short notice. He had been due to face the cameras with Ministers Eoghan Murphy and Paschal Donohoe.

When reporters rang to ask why Leo Varadkar couldn’t attend the good news announcement in Dublin’s O’Devaney Gardens, a Government spokesperson explained he couldn’t do the gig with the lads because his flight from America had been delayed.

The Labour Party leader was unaware of this when Leaders’ Questions commenced in the Dáil at midday. “Where were you this morning?” demanded Brendan Howlin of the Taoiseach.

The tasty photo-op was scheduled for 10am.

Presuming he meant his flight departed at 1.30am Irish time, he could have made the gig if he really wanted to.

That excuse has a slight ring of fake news of it.

Leo Varadkar was at home, on the phone, frantically searching for the run of himself, which he has a worrying habit of losing when he travels abroad.

What was it this time, sez you?

He only went and insulted the media, and political journalists in particular.

It happened at a lunch where he was trying to impress a group of high-flying young Irish men and women who are making it in New York, concrete jungle where dreams are made of, etc.

Trailblazing media, money and techie types. Leo’s kind of people. He gets them. Then they go and rat him out to journalists.

He also gets Donald Trump, or at least he gets the president’s irritation with the media and “sympathises” with him. The Donald don’t get no breaks with these media bums. And Leo knows how he feels.

Leo gets it. But he doesn’t appear to get how dangerous the Trump rhetoric is for truth and democracy.

The Taoiseach sees hacks hanging around Leinster House in packs looking for stories. Did you ever know the like? As the Donald would say, and Leo concurred on this point over lunch with the happening youth, they aren’t interested in the truth. Although when a politician says a journalist isn’t interested in the truth it’s usually because that politician can’t handle the truth.

Earlier this year in the Dáil he accused one newspaper of peddling fake news. It wasn’t. But that doesn’t matter. And in January, in Davos, he revealed his sneaking regard for Trump’s attitude to serious journalism.

Anyhow, when news of the latest thrilling episode of Taoiseach on Tour hit town, the Leinster House reporters did their best to appear hugely annoyed. Amid fears tablets would have to be administered to bring down the abnormally high levels of dudgeon among the ranks, Varadkar moved to defuse the situation while his opposition counterparts shamelessly milked it.

The Fianna Fáil leader talked about the homelessness crisis, blasting the government for the lack of urgency and delivery in its response to it. He cited the many announcements made about various schemes “and the media was very fair to you” and “they reported you faithfully”. Along the way, he craftily stitched in references to the media and its sympathetic treatment of him.

Mary Lou McDonald abandoned any attempt to introduce a masking issue and went straight in with a few haymakers on his reported remarks on the Irish media. “You have confirmed in part these remarks that you are in sympathy with president Donald Trump and that you believe that Irish journalists have no interest in the truth.”

For all the things he was saying now about context and the rest she believed “you simply wanted to have a go”.

When he got a chance to reply, he said his piece. “I profoundly regret if anyone in the country thinks that in any way that I don’t support a free press or don’t respect the work of journalists.” Cornerstone of democracy, and all that.

Although the media is not above reproach or criticism, he stressed. Which is proper order.

No, it’s people like Donald Trump, or those who share his views on the media, who want to be beyond reproach.

Leo is irked that what he said was leaked. “I’d like to be able to respect the privacy of that event, but obviously that isn’t now possible.” He is annoyed that what he said at the lunch was taken out of context, although people in Leinster House on Tuesday were puzzling over what context Trump’s views on the media might be acceptable.

They were also puzzled by his comments about the Irish media trivialising the news and chasing tittle-tattle and gossip. (Some of us have to do it.) Leo seems to find this very distasteful. This amused Micheál Martin hugely.

Too many political journalists interested in gossip? “I mean, former taoiseach Enda Kenny would have been very interested in hearing that because he considered you quite notorious in feeding the rumour mill in Leinster House on an ongoing basis with journalists and you weren’t remiss in that regard.”

The incident also gave Willie O’Dea a chance to roll out his indignation to its fullest extent. “Absolutely flabbergasted,” he spluttered on the plinth, expressing his concern about the Taoiseach’s seeming support for “Donál” Trump’s view of the meddlesome media. As for people trivialising politics: “This is a guy who organised a photo of himself putting a spoon in his dishwasher.”

When we throw in fun runs and gym kits and posing with animals and novelty socks, Leo really finds himself up to his oxters in pot calling the kettle black territory.

How did the Taoiseach get himself into such a pickle? For all his media savvy, when meeting a group of media savvy young people, he didn’t think his remarks would get out. The same thing happened Boris Johnson recently, and he’s supposed to be very intelligent too.

Above everything, Leo seemed miffed that he was caught out.

Of course, we’re all rather hurt now. How could you do this to us, Leo? You know how sensitive we are.

Indeed, this has been a most difficult sketch to write.

It is practically impossible to type while clutching your pearls and reaching for the smelling salts.

I’m off to lie down in a darkened room.