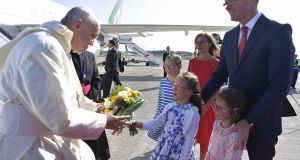 We are delighted to kick off this new political season with news of a happy ending, a global picture exclusive and a plea from the Tánaiste requesting people to stop offering him cats.

Readers may recall a heartwarming story of youthful enterprise surfacing after the papal visit, when Simon Coveney revealed he had to bribe his youngest daughter with the promise of a kitten after her last-minute refusal to greet the pope at Dublin Airport.

Emergency negotiations opened on the tarmac as Annalise (5), displaying a flair for the art of brinksmanship, declared she was too tired and cold to take part in the carefully choreographed welcoming ceremony with her sisters Beth (9) and Jessica (7). The Minister for Foreign Affairs tried to change her mind with the opening offer of a slap-up meal. This was rejected, along with a follow-up offer of access to his phone for a month. Annalise correctly pointed out that she would take the phone anyway.

An outright offer of his iPad was similarly spurned, so Coveney played the ace card.

Shrewd Annalise nailed down the deal before committing to anything.

And, just in the nick of time, the Coveney girls greeted Pope Francis in Italian, Spanish and English and Annalise presented a bouquet of flowers. Everything went swimmingly.

As soon as the story appeared, the Minister was showered with offers of kittens. In the past three weeks, staff in his Dublin and Cork offices have been fielding emails and calls from all over the country. However, the search is already over. In the week following the Papal visit, Simon made good on his promise. The payback puddy has fallen on his feet and is now being spoiled rotten by three besotted girls in Carrigaline.

He is a cheeky one-eared kitten from Blackrock in Cork who climbed into a warm car engine for a snooze and nearly died when the engine was turned on. But his cries saved him and he was nursed back to health – minus his ear – by a local animal rescue volunteer.

The Coveney bribery cat was to have been named Francis, but in a nod to both the pope and the kitten’s bravery, he will henceforth be known as Spirit.

All bright as buttons this week at the Fianna Fáil think-in. Ready for the parliamentary session to come and putting up a determined – if slightly unsteady – show of faith in the continuance of their confidence and supply agreement with Fine Gael.

One of the more entertaining aspects of the event was the polite jockeying for position between the two senior figures in the host constituency of Fingal, where TD Darragh O’Brien and Senator Lorraine Clifford-Lee hold sway. During the public media pieces, party leader Micheál Martin exerted the gravitational pull of a small planet on his two north Dublin representatives, who couldn’t seem to break free from closely orbiting him whenever he ventured outside.

Clifford-Lee, who is party spokeswoman on Justice, Equality and Children, has her sights set firmly on a Dáil seat and O’Brien, who holds the high-profile housing portfolio, would, of course, be delighted if the party could deliver two seats in the next election.

Clifford-Lee  had her posters up on lampposts  welcoming party colleagues to her area.

During his after-dinner speech in Malahide’s Grand Hotel on Tuesday night, Micheál made a point of thanking the duo for hosting such an excellent gathering and remarked upon their impressive unity of purpose.

Parliamentary party members seemed to find this most highly amusing.

Clifford-Lee also had her posters up on lampposts around the hotel welcoming party colleagues to her area. She followed up with goody-bags for everyone. The contents included a “hot chocolate swirl” from Ashbourne-based chocolatier Chez Emily and a packet of crisps from North Co Dublin purveyor Keoghs.

We hear there was an enjoyable but restrained evening of collegiate bonding afterwards in the bar, topped off by some with a gallop to Gibneys licensed premises for last orders. The other big event on in the Grand’s conference centre on the night was the “8th Baltic Meeting on Microbial Carbohydrates”. Which must have been a blast.

However, the big social event of the week was on Thursday night when the Taoiseach hosted a lavish Fine Gael fundraiser in the Castleknock Hotel in his Dublin West constituency. The ballroom looked stunning for the event, with candelabras on the tables and black sashes on the white-draped chairs.

It was a modest affair. Oh, just €200 a plate. As you do. It was fully subscribed – all very low key, no big FG names throwing shapes – with 300 guests tucking into the meal and devouring Leo’s every word afterwards.

That’s a handy 60k for the election coffers. Not, the Taoiseach keeps insisting, that there is one in the offing. If his TDs and Senators are also busy with fundraisers, that just in the normal run of things. Josepha Madigan is hosting a big do in Dublin-Rathdown in a couple of weeks and the following night it’s Senator Catherine Noone’s turn. She’s holding a fundraiser in Clontarf Castle, now that she is joining Richard Bruton on the ticket in Dublin Bay North.

It’s a dirty job but Ming’s gotta do it

Luke “Ming” Flanagan didn’t mince his words on Tuesday when delivering a blistering attack on Hungary’s ultra-conservative PM Viktor Orban during the European Parliament’s debate on disciplining his country for repeated breaches of the rule of law and hostility to migrants.

Party leaders described Orban as “the most corrupt leader in Europe” and a “neo-fascist in bed with Putin”, but Ming appears to have upset the delicate sensibilities of his colleagues by calling him “a piece of dirt”. The following day a number of MEPs demanded that he be censured for unparliamentary language. The parliament’s bureau is now considering the issue.

Ming, MEP for the Midlands-North West constituency, was incensed at the mere sight of the controversial Hungarian leader, and he let fly from the start. “Mr Orban, I am no fan of the European Union, but I have to say you completely and utterly disgust me . . .”

Unfortunately, English speaking correspondents missed Ming’s opening salvo due to a malfunction in the interpreters’ booth.

Instead of relaying Flanagan’s passionate defence of migrants – instancing his own family’s experience – the parliament’s TV system continued with the feed from the English-language booth, even though the interpreters were off-duty and chatting among themselves.

“I think he’s all right,” said another.

I’ll say it again. Don’t like the European Union, but as far as I’m concerned: You. Are. DIRT

The MEP later tweeted that his office was trying to establish why the live stream cut out for some of his speech. “Probably Putin up to his tricks,” he added.

At the end of his contribution, Ming repeated what he said at the beginning – once more, with feeling. Orban, who was in the Strasbourg hemicycle (chamber), winced at his words.

“I’ll say it again. Don’t like the European Union, but as far as I’m concerned: You. Are. DIRT.”

There was a big reaction to his contribution.

On Thursday, Ming tweeted again: “Apparently I’m now in the pockets of both Putin and Soros. They must be wearing the same pair of trousers.”

Tom McLoughlin remembers his very first job as an officer in the Government Information Service.

He thought it was the most marvellous gig ever: a trip to his beloved Croke Park for the launch of the newly revamped stadium and a special blessing ceremony for the upgraded Hill 16.

“March 14th, 2005. I’ll never forget it. The taoiseach Bertie Ahern and GAA president Seán Kelly were there for the rededication of the Hill,” recalls Tom. “I didn’t know then that it would take another 6½ years for the blessing to kick in and for Dublin to win the All-Ireland.”

Nearly 14 years and four taoisigh later, “Big Tom” is moving on. A familiar face around Government Buildings and Leinster House and at official State occasions, he will be missed by his colleagues in the GIS, the many politicians he kept a protective eye on and the countless journalists he has tried to mind, keep in line or let down gently (not always successfully).

Tom’s last major gig – he’s a very tall man – was overseeing GIS arrangements for the recent Papal mass in the Phoenix Park. It was a huge logistical operation and it passed without a hitch.

He lists the historic visit of Queen Elizabeth to Ireland in 2011 and US president Barack Obama’s visit here in the same year among the highlights of his time in the GIS. Accompanying Taoiseach Enda Kenny to Flanders last year for the special commemoration of the first World War Battle of Messines also stands out.

“Do you know who my favourite taoiseach was? Whoever was taoiseach when the question was asked,” he says, in true civil service fashion.

Outside Merrion Street, one of Tom’s proudest achievements is having one of his poems published in the centenary programme for the National Football League final in Croke Park in 2016.

And neatly bookending his long spell dealing with grumpy media types (he’s relocating to Denis Naughten’s department to work on energy policy) was his last official assignment two weeks ago, in Croke Park.

“After the match, I had to walk the Taoiseach over to the RTÉ Roadcaster to do an interview with Marty Morrissey after Dublin did the four in a row. I was very happy about that.”