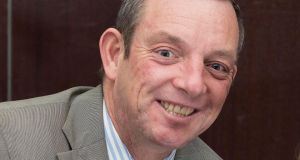 TD Jerry Buttimer: “His attendance was a symbolic gesture and sent a powerful message of support for what we are doing.” Photograph: Andres Poveda

Did the Taoiseach know where he was going on Tuesday night?

Or was he unwittingly inveigled into that gay drinking emporium by his Cork South Central TD, Jerry Buttimer? You wouldn’t know what to think these days.

At a media conference in Maynooth on Wednesday, following the launch of a pastoral statement from the Irish Catholic Bishops’ Conference called The Meaning of Marriage, the Bishop of Elphin was asked by a woman from the Catholic Voice if he had any comment to make about the Taoiseach visiting a gay bar.

As a rule, this is not a question you would expect to hear at a briefing in St Patrick’s College.

So. What about Enda’s evening out? (A first for a Taoiseach, apparently.)

“You can go into a bar sometimes without knowing what kind of bar it is,” replied Bishop Doran.

Then he qualified this by saying: “I don’t know what his thought was, so I wouldn’t want to comment on that.”

Fair enough. We’re always wandering into strange lounge bars only to be scandalised by the price of the drink, or the state of the toilets, or the disgusting youthfulness of the clientele. If only somebody had told us, is what we’d be thinking.

Take that time our buddy the Monsignor invited us for drinks and hymns at Cardinals and Croziers in Fr Ted Street to celebrate the launch of the spring/summer mitre collection with some of his old pals from the seminary, just in from Rome after the consistory.

We hadn’t a clue what to think or what kind of bar it was. To our utter surprise, the gaff was heaving with bishops.

The bishop wasn’t to know what Enda was thinking on Tuesday night, but Buttimer could fill us in on the Taoiseach’s pre-Pantibar thought process. Did he know where he was going?

“Of course he did. I told him last week about our Christmas party and said it would be great if he could come along,” explained Jerry, who is chairman of Fine Gael LGBT.

“We were delighted when he turned up. It’s an acknowledgement of all the work we’ve done around the Children and Family Relationships Bill, the Gender Recognition Bill and the marriage equality referendum.”

Buttimer was speaking to us yesterday from Washington DC, where he is attending the Victory Institute’s LGBT Leaders Conference with Dale McDermott, president of Young Fine Gael, and Tiernan Brady, of the Gay and Lesbian Equality Network, who lost out to Mary Fitzpatrick earlier this year at Fianna Fáil’s Dublin selection convention for the European elections.

The Cork backbencher says Enda had a pint and stayed for a couple of hours, posing for photographs and chatting away. Many of the patrons didn’t pay a blind bit of notice to him.

“His attendance was a symbolic gesture and sent a powerful message of support for what we are doing,” remarked Buttimer, who hopes that, after the Taoiseach’s imprimatur, he might even see a few bishops coming through the doors of Pantibar.

“All they need to know is that they’ll be very welcome, we’d love to see them – that’s the kind of bar this is.”

Ireland’s oldest political party is in critical condition, bouncing along the bottom of the political pond after registering a dismal 6 per cent in this week’s opinion poll.

Tánaiste Joan Burton had much to think about as she made her way from Government Buildings to the meeting in Leinster House. She left her ministerial office and crossed the “bridge of sighs” corridor which links the two buildings and leads on to the area in front of the entrance to the Dáil chamber.

The mood among Joan and her entourage was somewhat subdued. As she went down the main staircase, the Tánaiste smiled and waved up to a group of schoolchildren looking down from the upper landing.

She proceeded on her way, only to be stopped in her tracks by a youthful shout.

“Joan Burton, I love you! My name is Mark Cummins. Will you marry me?”

The Tánaiste was a bit taken aback. But not in a bad way.

“At least somebody loves me,” she ruefully replied. (Joan’s personal popularity rating tumbled by 9 per cent, which must have hurt.)

Onwards to the meeting, considerably lighter of step, telling every second person she met: “I’ve just had a proposal of marriage.”

Mark Cummins, the young man who playfully proposed, is a third-year student at the co-ed Scoil Mhuire gan Smál in Blarney, Co Cork.

“I was talking before about her in CSPE (Civics, Social and Political Education) class, saying how much I loved her and, by chance, she walked past!” said Mark. The 14-year-old comes from a family of Labour supporters. “I think they do great stuff for the country.”

As for Joan? “I definitely think people aren’t giving her a chance. She’s not in the job very long.”

As we left them, we noticed Fine Gael’s Michael Creed, from adjacent Cork North West, sidling over to introduce himself to this large group of future voters. He only stopped by briefly, which is allowed. It isn’t unknown for territorial squabbles to break out between TDs playing host to visiting constituents and local rivals brazenly trying to muscle in on their group.

We were talking recently to a deputy near the window inside the main door when he broke off mid-sentence, looking out, aghast, at a large group having their photograph taken on the plinth.

And with that, he raced outside as a smiling constituency rival made good his escape.

Mary-Lou’s privilege is a bit rich

Apart from her Sinn Féin colleagues, she got very little support in Leinster House.

Just last week, Mary Lou and her Dáil colleagues reacted angrily when Joan Burton made remarks about sexual abuse within the republican movement.

The Tánaiste did not name anybody.

Sinn Féin screamed blue murder and demanded justice. The Dáil had to be suspended three times.

But this week, they had no problem with Mary Lou’s use of privilege to impugn the reputations of people who had no chance to answer back.

Newly elected independent senator Gerard Craughwell called for a debate on the issue of privilege.

“Privilege should not be taken lightly . . . It is wrong to use privilege in a frivolous way. If we are to use it, it must be in exceptional circumstances . . . I appreciate the deputy leader of Sinn Féin is in the newspapers today but I do not refer to her specifically.”

“She’s not here to defend herself!”

Which is a bit rich, given her performance the day before.