Miriam Lord: Dr Varadkar’s Chamber of Covid is not for the faint-hearted 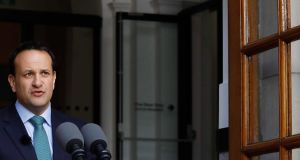 Taoiseach Leo Varadkar: “And Sinn Féin Ministers on their Facebook site promote the fact that they hand out food parcels to the poor – reminiscent to me of Donald Trump handing out toilet rolls.” Photograph: Leon Farrell

Audience sparse but plenty of spark.

This was an ensemble monster movie in the old tradition featuring a host of famous political horrors drawn together for a special shriekathon during an unprecedented pandemic.

Covid-19 is a chilling frightener on its own. But the long-drawn-out matinee also featured The Dawn of the Department of Health, The Rocky Housing Horror Show and The Return of Brexit.

It wasn’t for the faint-hearted.

When Simon Coveney materialised in the chamber and conjured up the wretched spectre of Brexit to haunt us again, it was too much for many observers and they fled, fearful that his crushing reasonableness would trigger painful flashbacks.

A chapter starring Eoghan Murphy was the last one to feature due to fears his rapidly burgeoning beard, while not yet the full Hagrid, might frighten younger viewers forced to watch Oireachtas Live by sozzled homeschooling parents. On the plus side, the family of small voles which had been living until recently in Eamon Ryan’s since home-trimmed coiffure has found a new home in the Minister for Housing’s commodious whiskers.

And the Minister for Health, Simon Harris, pale and wan and doing his best to remain positive in his Casper-the-friendly-ghost way while, all around him, TDs told of death and heartbreak and asked urgent questions about a healthcare system straining under the pressure.

The day held forth a lively compendium of woe.

The idea of it all tipped the Taoiseach over the edge. During the opening Covid section, Leo Varadkar monstered an unsuspecting Mary Lou McDonald and then ended up telling everyone about his recurring Leaving Cert nightmare.

But he was playing with fire. His passionate outburst, while temporarily halting the verbal gallop of the combative Sinn Féin leader, emboldened him to the point of recklessness. In the course of blasting her party’s performance in Northern Ireland, he let down his guard during a row over food parcels, handing McDonald’s fervent supporters a delicious chance to strike back.

She had rounded on remarks by the Minister for Finance indicating that the €350 Covid-19 unemployment payment would be cut in June. To even suggest such a move showed how out of touch Fine Gael was with workers and families during this time of economic shock, she thundered. And the same people also suffered from “the slash-and-burn policies” imposed by Fine Gael and Fianna Fáil during bad years when even the minimum wage was cut.

Mary Lou was careful to scare up the double abominations of FG and FF – her party is hoping to provide the main opposition against both of them if government formation goes the way they want it to go.

The Taoiseach’s response was mild to begin with. While this payment can’t last forever, he was pleased to confirm it would be extended beyond the cut-off point mentioned by Paschal Donohoe.

But then the gloves came off. Leo laced into Mary Lou.

He regretted the party political nature of her contribution “because what she said was so two-faced and so fundamentally dishonest” he bluntly declared. Mary Lou slowly removed her specs and lasered him with a glacial glance.

Back here, he tartly informed her, the government was providing a weekly €350 pandemic unemployment payment to help people who had lost their jobs. “What happened in Northern Ireland, where Sinn Féin is in office? A hundred pounds a week, nothing for the self-employed until June,” he harrumphed, gathering a head of steam.

SF at a minimum

“And Sinn Féin Ministers on their Facebook site promote the fact that they hand out food parcels to the poor – reminiscent to me of Donald Trump handing out toilet rolls after the hurricane hit the islands in the Caribbean.”

Stabbing the air, the Taoiseach accepted his Sinn Féin counterpart is entitled as an opposition leader to come into the Dáil whenever she wants and criticise his government for not doing enough, but that doesn’t diminish the fact she also leads her party in Northern Ireland where the minimum wage is lower, there is no €350 weekly payment and where “you hand out food parcels and boast about it on Facebook”.

A welcome clarification. Until now, if there was something about his job Leo would not boast about on social media, nobody knew what it was.

He returned to those food bank photos in a follow-up reply.

“I think it’s a great thing, by the way, that people do provide food banks and hand out food parcels. This Government actually funds food banks and we’ve done that for a very long time. What we don’t do is post on Facebook pictures of our Ministers visiting them and handing out food to the poor.”

Naturally, it didn’t take long for lovely snaps of Leo’s pal Eoghan Murphy to surface on social media. Taken not 24 hours earlier, they were up online for all to see just as his boss was on his feet in the national parliament bemoaning the practice of politicians posting self-congratulatory photos of themselves doling out food.

And here’s his Minister for Housing, selflessly delivering spice bags and chicken balls to destitute mothers and footless children in the notorious south Dublin ghetto of Ranelagh. Posing in the “hood” wearing disposable gloves and smiling behind a facemask while holding up brown bags of food in each hand.

It’s ironic, but Leo Varadkar was annoyed with Mary Lou McDonald because she too is fond of dishing it out and never lets up with the criticism.

But as the images of Murphy “helping” the wonderful volunteers from Ranelagh Community Response deliver healthy meals to cocooning residents in a local senior citizen’s complex show, it transpires she wasn’t the only one dishing it out this week.

Awkward. But then, the Taoiseach blundered into dangerous territory when daring to rebuke rival politicians for shamelessly bigging themselves up on social media. Glasshouses and stones come to mind.

The unfolding frightfest that was Dr Varadkar’s House of Covid continued with another round of uncertainly and confusion over what will happen to this year’s Leaving Cert exams.

Socialist Mick Barry was concerned about “a crisis of democratic legitimacy” around the exams, citing a poll carried out by the Irish Second-Level Students Union which found that 79 per cent of nearly 24,000 Leaving Cert students want them cancelled.

Barry said students feel they are being forced to sit these exams against their will and “are, in effect, being bullied by your government”.

Does the Taoiseach accept the findings of this poll?

“In a democracy, legitimacy does not derive from opinion polls of any sort, of any nature, carried out by anyone. Sometimes I wish they did because, as you know my own experience is one of doing much better in opinion polls than real elections,” chuckled Varadkar.

“Do I accept the democratic legitimacy of opinion polls? No, I don’t. And if you did, deputy, I imagine you’d be voting for me for Taoiseach because apparently that’s what the latest opinion poll says the public want.”

Still, he fully understands the stress the sixth years of Ireland are under.

“I still get nightmares about my Leaving Cert maths paper.”

That should comfort the students.