Miriam Lord: It’s Kerry v China as the Healy-Raes look to the east 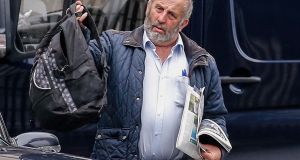 There is more than a touch of the Skibbereen Eagle about Danny Healy-Rae this weather as he continues to keep a beady eye on China from his eyrie in Dáil Éireann.

Or Buses-Buses Healy-Rae, as we later discovered. This is what they call him in the United Nations.

Both his contributions to the coronavirus debate this month have included a cut at the Chinese and their handling of the viral outbreak. The first one was at the beginning of April, when he thanked the Government and chief medical officer Tony Holohan for their “massive” work. But he wasn’t so keen on the medical equipment which came our way from the Orient.

Four weeks on in the Dáil and Buses-Buses Healy-Rae’s opinion hasn’t changed one bit.

He wanted the Taoiseach to explain why he isn’t demanding an investigation “into how and when this virus actually began in China”.

Does he not want to know the answer? All the people who have suffered as a result of it certainly want to know.

“This virus was in China long before January 20,” he told Leo Varadkar.

“Some of the PPE stuff that ye paid for, and went out of your way to thank them publicly for, was given to them by the Italians in early December. I’m asking you now not to buy another bottle for to contain this virus from the Chinese until we know what’s the truth.”

Brows furrowed all on sides.

“Because the people are entitled to the truth and I am calling on the United Nations to carry out an international investigation into what happened because we need to know,” said Healy-Rae, channelling the Skibbereen Eagle’s celebrated 1898 editorial warning the land-hungry Czar of Russia that the newspaper was onto his caper.

Both men addressed the economic consequences of the Covid-19 crisis, particularly as it affects their county

The Taoiseach did not agree to carry this message to New York, probably because Ireland is still trying to win a seat on the UN Security Council, so he won’t want to be making any waves in diplomatic circles at the moment.

The TD for Kerry did not use one of his two buses to travel from the Kingdom with his brother Michael on Thursday. The Healy-Raes were the RIG’s (Rural Independents Group) two designated representatives at this week’s sole sitting of the House.

Later in the afternoon, both men addressed the economic consequences of the Covid-19 crisis, particularly as it affects their county.

In a change to their normal chamber format, Michael sat near his usual berth in the front of the last section opposite the Government benches while Danny, who usually sits next to him, was socially distanced to a pew two rows back and across the aisle in a different section. So they couldn’t discuss things among themselves as they tend to do before and during contributions.

Michael modestly averred that while he is “very glad that Kerry is the tourism capital not just of Ireland but of the western world”, this sector has been severely impacted by the shutdown. He hoped the Government can come up with sensible proposals to help businesses and workers to keep going.

There are many jobs people can still do without falling foul of the current restrictions.

“I’m not being smart about social distancing” but if somebody wants social isolation “they should go out and work on a digger”. Nobody would get near them on a building site.

Danny would know all about that. He runs a thriving plant hire business. Last year it recorded an 85 per cent increase in post-tax profits to €444,227.

Michael was also worried about the situation facing coach companies. He knows of some operators in Kerry who bought and registered new vehicles at the beginning but they haven’t done a mile on a road. Their value will drop by €30,000 next year without having been driven.

His brother Danny was in full agreement. He is fully up to speed on this too.

“There’s a yard of buses parked in Killarney. ’Twould cost millions of euros to fund what’s gone into that yard and they’re all parked. But every one of those buses had a driver, and maybe two drivers, and all of those drivers now are not getting paid a cent. They are being left behind. It’s wrong, I’m sorry to say . . .” he boomed, getting quite worked up.

But the Ceann Comhairle put a halt to his gallop because he was over time.

As Danny was still thanking Seán Ó Fearghaíl for his forbearance, his brother rose to make a very important point of order.

But where was Danny? Two rows and the width of an aisle above him. Michael turned around quickly and shot an urgent look up along the benches towards his brother. “And . . ?” he prompted.

There needs to be a road map, Minister, for publicans and their likes all around the country

Danny, still on his feet, sounded flustered. Across the floor and holding the fort, Minister for Enterprise Heather Humphreys looked absolutely fascinated.

Michael jumped in. “We have to declare, yeah.”

The udder brudder duly declared. The Ceann Comhairle was agog.

Two buses. Just the two, confided Buses-Buses Healy-Rae, all of a dither.

So Michael chimed in from below for the benefit of the Chair, who was doing his best but failing to keep a straight face. “And it’s just doing the thing properly like, you have to declare . . .”

Then Buses-Buses cut loose and decided he was going for full disclosure (apart from the farming, the lands, the shares and the plant hire business).

“We know that, we heard about it,” chortled the Ceann Comhairle. “A good one too, by all accounts.”

“And there needs to be a roadmap,” said Buses-Buses, finding his voice again having declared the two coaches and the pub.

“And do you have a hotel as well?” wondered Heather, who couldn’t stop laughing.

“There needs to be a road map, Minister, for publicans and their likes all around the country because it looks like that many of them won’t be reopening, but for the ones that will try to there needs to be a roadmap put in place and they need to be told when, roughly, they will get to open their doors again,” cried Healy-Rae, ignoring the Minister.

“I’m sure they will reopen in Kilgarvan anyway,” soothed Ó Fearghaíl.

Otherwise Buses-Buses Healy-Rae will take it all the way to the United Nations.

Three relatives dead after apparent murder-suicide in Kanturk, Co Cork 15:38
Covid crisis: Five dead in North and 727 new infections 15:24
Number in hospital with Covid-19 at highest point since May 13:41
Almost 20% of staff at Dublin hospital have antibody evidence of Covid-19 infection 13:23
Family proud of Irish volunteer ancestor who died on hunger strike in 1920 10:33