Taoiseach reckons if you can’t get Opposition to support the plan, then make them own it 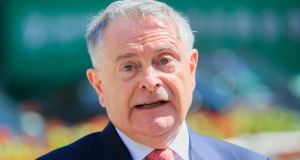 How is a Labour leader supposed to vehemently oppose the Government’s broadband project when the silken words of an illustrious predecessor are used to undermine his case? To make matters worse, the actions of yet another party stalwart are then thrown in his face to further dent the body of his argument.

Brendan Howlin is adamant the Government has made the wrong choice on broadband. On Tuesday, he marshalled his thoughts on the issue and presented them in the Dáil to the Taoiseach. As a man who likes to remind erstwhile colleagues he was once the minister for public expenditure in a Fine Gael administration and there isn’t much they can tell him about overseeing major projects, Brendan is deeply suspicious of this new deal.

He made a persuasive case for State ownership of the project.

Until Leo Varadkar nipped in and tried to sabotage him by heaping praise on the Labour party while approvingly invoking the names of former leader Pat Rabbitte and former minister Alex White to bolster his claim that his plan is the only way to go.

The Taoiseach has full confidence in his Government’s broadband strategy and is keen to do his utmost to see it implemented, even if the big idea for the whole thing came from the Labour party in the first place.

“I really feel that this project is one that you as a party should be proud of,” he informed a stunned-looking Labour leader, shamelessly turning on the treacle.

Micheál Martin, who had earlier lambasted the broadband proposal, rolled his eyes and laughed. The Fianna Fáil leader was still trying to come to terms with Leo’s impassioned “appeal” to the Opposition to give his project a chance.

“Impassioned” isn’t normally a word you type alongside this Taoiseach’s name. Maybe it was the alarming fall in his popularity rating in Saturday’s opinion poll which compelled him to inject some proper enthusiasm into his contribution at Leaders’ Questions, as opposed to the default loftiness.

There were echoes of 1991 when Fianna Fáil’s Gerry Collins famously pleaded with Albert Reynolds not to challenge Charlie Haughey for the party leadership.

“Don’t do it, Micheál. Don’t burst up the broadband!”

The plan will be debated in the weeks to come.

“The one thing I would just ask of the Opposition parties here – I ask this sincerely of the main Opposition party but of the others too – I would appeal to you to not rule out supporting the national broadband plan just yet.”

Listen to the arguments and consider them, Leo urged TDs, pleading with them not to take broadband “back to square one”.

Going back to square one wasn’t Brendan Howlin’s biggest concern. He was more worried about going back to 1999 and the disastrous privatisation of Telecom Éireann. A big problem today with extending the broadband network is that the “poles and ducts” needed to carry the fibre cables are now in private ownership.

“Renationalise Eircom. Simple,” said Richard Boyd Barrett, suggesting a way for Ireland to get all its broadband ducts in a row.

Instead of ignoring the Socialist’s suggestion, as would be expected of true-blue Varadkar, he revealed this option had been carefully considered but was ruled out for cost reasons.

Despite all Leo’s fervent requests, the Opposition remained unconvinced. “What is the justification or the logic of the Taoiseach’s argument for a private monopoly to own the rural broadband network in perpetuity?” wondered Howlin. Instead of learning the harsh lesson of Telecom Éireann, he said the Government now intends to repeat history and “privatise the next generation of telecommunications”.

Brendan knows his stuff and he told the Dáil the EU would sanction a State-backed broadband system, even at this late stage. “I assure the Taoiseach that our plans would deliver much better value to the taxpayers of this country.”

He did a bit of pleading of his own.

“I invite you, Taoiseach, to read the judgement in the Croatia case. They are providing broadband and it’s just so analogous to what we are doing here,” he declared, to general bafflement.

That was too much to take on board when Leo was getting slightly emotional over the provision of broadband while admitting that a Fine Gael Government has actually considered renationalising the phone network.

Visions of Enda Kenny and an unsuccessful election campaign were awakened

“I really appeal to everyone in this House to take a bit of time like we did. Take a few months to see if the alternatives really stack up and don’t rule out supporting it just yet,” persevered Leo. “We can sign this, we can make this happen.”

“Will it be worth a lot of seats?” asked Healy-Rae, twice.

“If we don’t sign this contract, it may never happen.”

One final push for doubtin’ Howlin.

“Deputy, you may not agree but I actually see this as a Labour project, as well as a project of this Government, because your party and your ministers were at the centre of making this project happen and making it a reality,” the Taoiseach said, sounding a little desperate by now. Former Labour leader Pat Rabbitte made the decision in 2012.

“And I note that in his article this weekend in the Sunday Business Post that he supports the Government decision to go ahead with this.”

Indeed he did. “When the offstage noise abates, it will be acknowledged that this is the best solution,” is how Pat ended a column which must have brightened Leo’s Sunday.

Brendan looked a bit sour about this.

But the Taoiseach wasn’t finished, pointing out that Rabbitte’s successor in communications, “Alex White, of your own party”, helped their decision by whittling down the options from five to two. The Government chose one of them.

Next up was Independent TD for Galway West Catherine Connolly, who reminded everyone of the fact that the Dáil declared a climate change emergency and bio-diversity emergency last Thursday. There didn’t seem half as much concern about that.

We’re all going to die, but at least we’ll have the broadband.