Miriam Lord: Adams delighted as he ventures into ‘Endaland’ 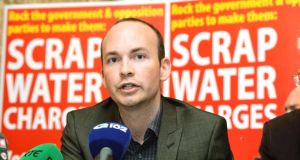 Shades of the Dublin South West byelection in the Dáil yesterday when Sinn Féin raced into what looked like an unassailable lead, only for the Anti Austerity Alliance to nip in at the last and steal its thunder.

Gerry Adams was on a roll in the chamber, reading from a densely typed script laced with tasty nuggets for hungry sketch writers. We’re neither picky nor proud. Leaders’ Questions can be a barren experience at the best of times.

Water was on the menu again. And it was water which did for his party’s prospects in last year’s byelection.

So this time, the Sinn Féin leader served it up with a twist, flavouring what is becoming a tired procession of exchanges on the issue with some fizzy word play.

Gerry sounded quite pleased with himself. “Endaland” was his theme and he bled it dry, mentioning it six times .

“Endaland” is a variation on “Planet Bertie” – that popular label used to great effect on many occasions to sum up the unique leadership style of the former Fianna Fáil leader. We licked our nibs.

It’s a bit clunky, but no matter. Gerry was loving it.

For good measure he threw in a flourish about Alan Kelly, who is in charge of the whole debacle. “Isn’t it ironic that it’s a Labour Party Minister, the Minister for Making It Up as He Goes Along, who is responsible for this mess?”

While Endaland didn’t raise many smiles, the Sinn Féin leader’s gag about Kelly got a some laughs.

But Gerry’s carefully crafted script also presented Enda with a readymade riposte. “In Gerryland, the record shows that Deputy Adams agreed he should pay for water until he heard the sound of marching feet and thought this was populism which required him to take a different stance.”

But the Taoiseach was more than happy to mine this Gerritorial seam.

“What you want to do is have a system where you can increase income tax and bring in a whole raft of new charges – commercial rates, land tax, corporation tax and everything else to pay for some utopian land that you seem to live in. It’s not Endaland or Gerryland, it’s fantasy land from your point of view.”

Then Paul Murphy, who snaffled Dublin South West from a confident Sinn Féin, stood to say his piece.

Paul had a script too. We reckoned his mentor Joe Higgins may have had a part in it because it bore all the hallmarks of a Higgins special.

Murphy was on the water trail too. Just like in the byelection. His contribution was full of the trademark Higgins’s fiery rhetoric, but it was his early assessment of Minister Kelly which hit the bullseye.

“Pride goes before destruction and a haughty spirit before a fall and that is the situation facing the Government now,” he began. “It is at that moment between pride and a fall.

“Faced with a huge protest on Saturday, faced with the prospect of a massive boycott, all the talk of listening has been forgotten and replaced by a high-handed, arrogant and bullying approach.”

So far, so thunderous.

And then: “Minister Kelly is swaggering around the place like Nelson from The Simpsons, threatening to rob people’s lunch money.” Then was a slight pause, then the place cracked up.

Nelson Muntz. Beefy Nelson is the resident schoolyard bad boy who crowns his misdemeanours with a triumphant “HaaHaa!”

As for Enda, he told the Anti Austerity TD that there was a “need for compliance” and “a need for everybody to understand that there will be equality in that compliance and that everybody who can pay should pay and will pay”.

Equality of compliance. That’s a new one to add to the list.

Then Murphy said the Government was trying to frighten people into paying their water charges by leaking rumours to the media. “As the deputy will understand, commentators are entitled to commentate . . .” remarked Enda. Whereupon Martin made a late charge for quip of the day, relating Enda land to third place. “That’s a relief,” he sighed.

Even Adams had to laugh.