Minister for Health tells Dáil laws are too restrictive

Enda Kenny takes questions on Varadkar’s comments last night to repeal the 8th Amendment. The Minister for Health described the current laws as too restrictive. 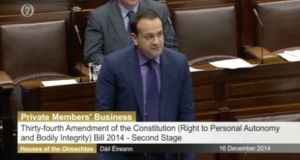 A number of senior ministers have backed views by Minister for Health Leo Varadkar that Ireland’s abortion laws are too restrictive.

Minister of State at the Department of Health Kathleen Lynch and Minister for Transport Pascal Donohoe said they agreed with Mr Varadkar’s comments in the Dáil.

Speaking on a private members’ bill tabled by Clare Daly on Tuesday, Mr Varadkar outlined his position on the eighth amendment, which gives equal rights to the mother and the unborn and advocated a more liberal abortion regime.

At an event in Dublin on Wednesday, Ms Lynch said she has “always felt that the eighth amendment of the constitution was too restrictive”.

“It will be an issue for the next government because it is not in any of the two programmes for Government” agreed by Fine Gael and the Labour Party, Ms Lynch added.

Mr Varadkar also said he does not “support abortion on request or on demand”.

“Speaking as Minister for Health, and also as a medical doctor, and knowing now all that I do now, it is my considered view that the eighth amendment is too restrictive,” he said.

“I consider myself to be pro-life in that I accept that the unborn child is a human life with rights. I cannot, therefore, accept the view that it is a simple matter of choice. There are two lives involved in any pregnancy. For that reason, like most people in the country, I do not support abortion on request or on demand,” said Mr Varadkar.

Mr Donohoe said: “I believe that the issue in relation to fatal foetal abnormalities is something that must be looked at in the next Dáil.

“I’m very much pro-life. I’d would be against the introduction of any kind of regime or policy that led to the availability of abortion for choice reasons.”

“I do believe that women and families that find themselves confronted with the unbelievable sadness of carrying a child that might not see life is a situation that is beyond the understanding for most of us in terms of the grief and upset it poses. I believe it is a matter that the next Dáil should consider,”

When asked if he thought an abortion referendum would be held next year he said:“I don’t believe there will be a referendum in the lifetime of this government. The reason for that is because, not what can be changed in the constitution or withing our current legal system but what would replace it,” he said.

“We saw in relation to the Protection of Life during pregnancy bill, the huge amount of work an time that went into drafting that bill and I believe that time period would be required to deal with this matter and in order to deal with it in a sensitive and comprehensive way.”

“I believe that amount of time is only something that a new Dáil could deliver. It is a matter that I believe does need to be looked at and we need to recognise the really difficult challenges that those mothers and families face and the grief and upset that it causes,” he said.

“Similarly, it forces couples to bring to term a child that has no chance of survival for long outside the womb if at all. Forcing them, against their own judgement, to explain for weeks and months to all enquirers that their baby is dead.”

When asked if he agreed with Mr Varadkar’s comments he said “I think I do; I think what Mr Varadkar was saying is that this needs to be looked at in the next Dáil and that is something that I do agree with.”