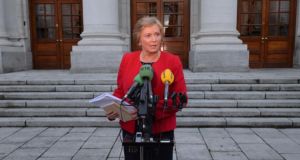 Reports of prostitution within direct provision centres were today described as “shocking” by Minister for Justice Frances Fitzgerald, who warned against stereotyping or stigmatising vulnerable women.

Ms Fitzgerald urged anyone with information to make it available to gardaí and said she would seek an official report when asked for her response to an RTÉ radio report on the issue.

“I did find and I do find those reports shocking. I certainly don’t want to see any woman in Ireland feeling that the only option for her is prostitution in order to look after her family,” she said.

“First of all I would be very concerned that [there would be] any targeting of the women who are in direct provision. I would be concerned as well about any stereotyping that might take place in relation to those women in any media reports.

“We are talking about a vulnerable group of women and I certainly don’t want to see them further stigmatised.”

Ms Fitzgerald said she would be asking for a report from the Reception and Integration Agency, which is responsible for accommodating asylum seekers and providing services for them while their applications for asylum are processed.

On the criminalisation of buying sex, Ms Fitzgerald said legislation was being prepared and would go before Cabinet in the near future.

She added that she had been monitoring what had been happening in Scandinavian countries in relation to this issue and would continue to do so.

The Minister was speaking at Government Buildings at a press conference to launch new regulations for the English language school sector.