Minister for Education does not rule out FG pact

‘We’ve done what we came in to do . . . restore a shattered economy’ says O’Sullivan 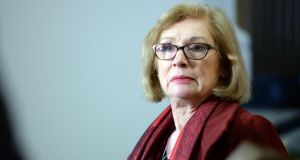 Minister for Education Jan O’Sullivan: “I wouldn’t rule it out, I think it’s something to be discussed, but hugely much more important for us is to present our own position to the Irish people.” Photograph: Eric Luke

The likelihood of a Fine Gael Labour election pact received another nod when the Minister for Education refused to rule out the possibility of a pact between the coalition partners.

Speaking in Limerick this morning, Jan O’Sullivan said her party has worked well with Fine Gael, but insisted the priority now is to put forward Labour’s vision for a future Ireland.

When asked directly if she was ruling out a Labour/Fine Gael pact Minister O’Sullivan replied: “I wouldn’t rule it out, I think it’s something to be discussed, but hugely much more important for us is to present our own position to the Irish people.”

Ms O’Sullivan accepted there are different views within the Fine Gael an Labour Party about an election pact.

“I would not at this point say that we should have a pact, but I think it is something that we will consider closer to the election, but it is not the most important thing the people decide ultimately where the votes go.”

“My strong view is that the Labour Party as a very distinctive party with a long history and very strong ideology that we need to first of all concentrate on our own manifesto and what we stand for, what we want to achieve in what is now a recovering economy.

“We’ve worked really well with Fine Gael in so far as we have done what we came in to do, which was to restore a shattered economy, to get people back to work and we’ve made alot of progress in that regard,” she added.

“But what we need to do now is to present to the public how we want to build up the kind of Ireland we want to live in into the future.

“So that’s the priorty for the Labour Party but issues around whether we would have an agreement for example with regard to transfers of preferences, I think that’s a tactical issue that we need to look at when we come closer to the election.

“For now what we need to do is to talk to the Irish people about our vision for the country and what we plan to do over the next number of years, should we be returned to government.

Ms O’Sullivan’s comments come after party colleague Alex White took to the airwaves last weekend to explicitly call for an election pact between the Coalition partners.

“When you look at what we have achieved in Government over the past four-and-a-half years, which has been enormous, I think there is a very strong case indeed for there to be an accommodation between ourselves, the governing parties, to ensure what we have achieved can be built upon in the years ahead,” said Mr White.

Mr White said such an accommodation would be looked at by the Government partners in the coming months. “I believe in what we have achieved in the last four-and-a-half years in Government; I don’t see a better combination than Fine Gael and Labour,” he said.